Wonder how long before we get them in Oz. Could be great for yeast starter bottles.

Metal revolution: Stella Artois presents the ultimate way to drink beer
Its metallic, sleek, red and stylish no, its not a fast new car but something almost as sexy: its the new Stella Artois aluminium bottle.

Stella Artois is the first in the New Zealand market to launch an aluminium bottle, which is a new concept in premium beer packaging.

Sleek, streamlined and super stylish, the new silver and red aluminium bottle shows why Stella Artois continues to be the beer of choice for discerning drinkers.

The limited edition Stella Artois aluminium bottle will be launched in New Zealand for the first time on 27 February in Wellington at an exclusive event featuring a fashion show by designer Little Brother, followed by a gig by funky jazz musician, Nathan Haines.

After a recent global launch, the exclusive aluminium bottle will be available to New Zealand consumers at special events with future plans for limited distribution to top end trade outlets.

This bottle is the collectors item of the year, says Jeremy OBrien, Stella Artois marketing manager, the new Stella Artois bottle fits perfectly with the brands sophisticated and stylish image. People are going to really want to be seen drinking this.

The bottle has been developed by InBev for use in prestige Stella Artois outlets globally and as an alternative to glass for outdoor events such as the Stella Artois outdoor movies in the UK, explains Jeremy..

Each bottle is 330ml, weighs 580g when full, has a commercial shelf life of 12 months and is sealed with a crown cork closure. And, of course, it looks great!
Aluminium packaging has a number of advantages: it means that the bottle is easier to drink, more convenient to hold and the unbreakable format improves consumer and staff safety.

Lion Nathan plans to introduce the bottle during 2005 following the assessment of trade and consumer reaction.

Stella Artois is the best selling Belgian beer in the world. Sold in more than 80 countries, its popularity is widespread.

The success of this premium lager lies in a distinctive, immediately recognisable taste and crisp character, which results from the carefully selected ingredients and exclusive brewing process.

Trade queries regarding the Stella Artois aluminium bottle should be directed to the Lion Nathan call centre on 0800 10 72 72.

And this is what the bottle looks like overseas.
I think there is a bottle or three in the photo somewhere 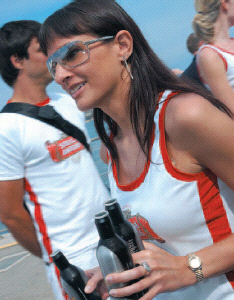 
May be a revolution for homebrewers. Could this end the dreaded bottle bomb. I'd be interested to know how much pressure they'd withstand.

Yep.
More links and photos and similar items in this topic too

I swear aluminium always alters the flavour of beer similar to a bottled/freshly poured comparison. This is an argument that has been going for ages and will continue for just as long I suppose.

If I was seeking an unaltered taste of Stella I wouldn't be getting it out of a can. Still, it'll probably go down a treat with the pretty people who drink for image rather than taste.