I have been using sodium percarbonate (oxyclean) which is the active component of Napisan without enzymes for bottle cleaning. I have just been given a keg and are cleaning this with it as well.

My question is what concentration do you use? I have been using 1 scoop (from the container) to 10L of water. I filled the keg to the brim with this mix and left it to soak for a while then rinsed with hot and cold water but there still seems to be a percarbonate smell in the keg. Have I used it too strong?

I use straight sodium percarbonate and there is no smell. It decomposes into oxygen and sodium carbonate which as far as I know are odourless. For a 30L fermenter I use two tablespoons when I want to soak. You would have to take into account the concentration of active ingredients in the product you use.

Hi Sosman
Its actually Clorox OxiMagic and lists 33% w/w sodium percarbonate as the active ingredient, its only one I found without enzymes. I just noticed the smell in the keg was similar to the smell when you open the container of cleaner up. I ended up giving it a bit of a soak in 1shot (phos acid) and it seems ok now.

I will be doing some ringing around the chemical suppliers in Perth tomorrow to find out about bulk percarbonate as you get it. Might even look at bulk phos. acid and the labsa one as well

I will second the effectiveness of the sod p. I place the smallest amount in my somewhat stained Mash esky and its turn back to a bright white!

even tested it on some dishes that the washer didn't clean baked on egg and crap (2 times in the washer) soked it for ~10 min a light mix of percab. and whamo it was bright and clean

I think its the bee's knees
S

I will be doing some ringing around the chemical suppliers in Perth tomorrow to find out about bulk percarbonate as you get it. Might even look at bulk phos. acid and the labsa one as well
Click to expand...

If it is anything like melbourne, I had to do lots of ringing. Some wouldn't sell small enough quantities or they wanted to charge an arm and a leg (or both).
S

A few people have requested info on where I got my sodium percarbonate in Melbourne (not to mention phos acid and LABSA).

All the information you should need is on:

in the supplier section.

With Hucon, you need to make sure you are talking to the bossman (David). If a chick answers just hang up and call back later - or ask for David. Although a while ago, the prices varied a lot depending on who you did business with.

Also keep in mind that the minimum size you are likely to get is 25kg and you might have to wait - particularly around this time of year. I reckon out of a 25kg bag I have used 5kg for brewing and the missus 20kg in the laundry - so make sure don't pay for it on your homebrew budget

When I last bought some it was around $5/kg, this is way cheaper than anything I have seen in the supermarket and it doesn't have nasty additives.

ausdb said:
Its actually Clorox OxiMagic and lists 33% w/w sodium percarbonate as the active ingredient, its only one I found without enzymes. I just noticed the smell in the keg was similar to the smell when you open the container of cleaner up. I ended up giving it a bit of a soak in 1shot (phos acid) and it seems ok now.
Click to expand...

It might be perfumed. I have found that Franklins "No Frills" is basically "pure" - ie as pure as it can get with it's carrier compounds, no scents, no "active enzymes".

Excuse my ignorance...
Whats wrong with having "active enzymes" in it?

ausdb said:
there still seems to be a percarbonate smell in the keg
Click to expand...

The stuff I bought from action seems to have a slight smell (perfume?) so I just rinse with a kettle or 2 of boiling water and it's pretty good after that.

Enzymes, as I don't really know what they are and their main purpose is removing crap from babies nappies not cleaning brewing gear I guess I would prefer to be safe than sorry

Howdy,
I have looked on the packet of Napisan but it doesn't list the "enzymes". If it is lysozyme, it would actually be beneficial as it effectively breaksdown bacterial cell walls causing the bacteria to lyse.
cheers
Darren

I thought "now with active enzymes" was just advertising jargon... Just like the cosmetic adds you see on telly... "now with antiageing soothing botanicals!"..... What the?

I use Napisan or a no-name equivalent. I just make sure its not scented..... It work great on any kegs/fermentors with hard to remove yeast scum. Just add 2 tablespoons, fill to the brim & leave for a day....
Then with the kegs, I rinse with tap water & 1/2 fill with a 20ppm solution of betadine & tap water. There then stored like this till I use them..... (I use the 10 litres of betadine solution to steralise all my racking equipment on kegging day)

I bought a box of Homebrand Bleach the other day...
Ingredients are listed as:
Soda Ash, Peroxygen. Contains no phosphorus.

Is this stuff ok to use for cleaning gear? I normally use Iodophor as my steriliser, but I'm wondering if I can use this stuff as a cheap cleanser??

Trough Lolly said:
I bought a box of Homebrand Bleach the other day...
Ingredients are listed as:
Soda Ash, Peroxygen. Contains no phosphorus.

Is this stuff ok to use for cleaning gear? I normally use Iodophor as my steriliser, but I'm wondering if I can use this stuff as a cheap cleanser??

Hi TL,
I use the Coles Reliance brand all the time. That is their homebrand. It works a treat as long as you dont min giving it a good rinse.
Here is the ingredients listed on the label. Funny I would have thought all bleach was the same. 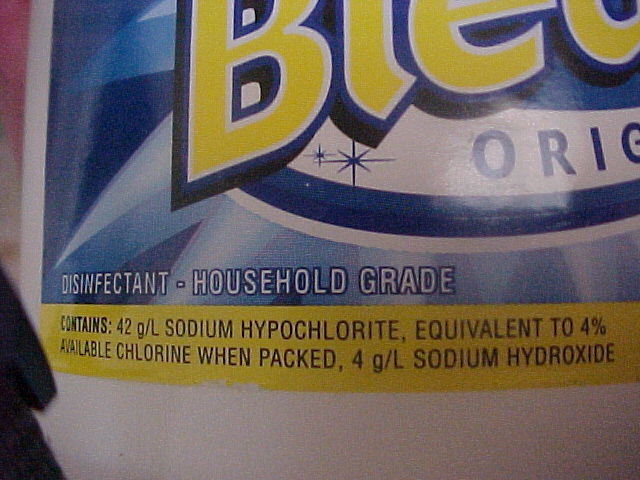 Thanks Johnno,
Yours is a chlorine bleach.

I did a quick trawl through hbd.org and found out that Soda Ash is another form of Sodium Carbonate, not PERcarbonate and is a reasonable cleanser, but not a sanitiser as such since it doesn't have the hydrogen peroxide that is present in Sodium Percarbonate...

The active ingredient in B-Brite and One Step is Sodium Percarbonate. When mixed with water, it makes something similar to a mix of Washing Soda and Hydrogen Peroxide. Sodium Carbonate (Washing Soda) is good for cleaning, but does nil for sanitizing it's the H202 that does the sanitation.
Click to expand...

But, as usual, opinions vary on the use of Sodium Carbonate. In HBD #1287, Arne Thormodsen (a Nigerian brewer perhaps :lol: ) states:

Soda ash is (if I remember right) Sodium Carbonate, also called washing
soda. It is alkaline enough to very slightly etch glass. When you are washing off the "film" you are probably rubbing off and/or polishing the etched glass on the surface. Glass is not as insoluble as people think, and you shouldn't use really alkaline cleaners on glass. Read the labels on some of the harsher spray cleaners sometime, they almost all say to not use on glass. Next time, you might use ammonia, which isn't harmful to glass. Of course, you need to use it outside.
Click to expand...

I noticed on a quick Google that Sodium Carbonate is a commonly used compound dishwashing as well as laundry powder.

The next question is what the hell is Peroxygen? Perhaps it is a compound not unlike Hydrogen Peroxide that helps with sanitising - perhaps the peroxygen reacts with the Sodium Carbonate in water to make a Sodium Percarbonate like compound??? Any chemists out there with nothing better to do on New Years Eve? :blink:

I recently visited an Aldi store and bought some of their "DI-SAN Nappy and Laundry Treatment". It's a 1kg container and cost $2.29.

It unfortunately doesn't have an accurate ingredient listing, except for "Active Ingredient: Sodium Percarbonate equivalent to 2% w/w Active Oxygen"; if only I could work out what amount to use... :unsure:

NRB,
Have a google for the manufacturer and see if you can find out the percentage of Sod Perc in the powder - typically it's around 35% for the cheaper cleaners.

As mentioned earlier in the thread, two tablespoons in a fermenter of water should be sufficient.

I can vouch for Napisan...I use the homebrand one and put 1 lid full in the ferm full of hot water for 1/2-1hr. Have found nothing yet that cleans like it. just give it a rinse with hot/warm water and it will be fine

But I dont use it in bottles..( actually I have not tried it in bottles yet..)for that I use pink brewers detergent