THE image at the centre of a row over J.Boag & Sons' latest advertising campaign was never going to appear on billboards or posters, the Tasmanian brewer says.

The photograph of a scantily-clad woman grasping the neck of a beer bottle as a man reaches to expose her breast was published by Boag's in a commemorative album, sales director Lyndon Adams said yesterday.

But the image, entitled Man's Arm, was never intended for use in the brewer's latest public advertising campaign for its premium beer, he said.

Alcohol and sexual assault groups have complained that Boag's latest advertising campaign, and specifically the Man's Arm image, was degrading to women and in breach of laws relating to sexual content in alcohol advertising.

Mr Adams said the album was produced to pay tribute to photographer Helmut Newton, who had provided photographs for the brewer's advertising campaigns since 1994.

Mr Newton died in a car accident in January.

"Since Helmut Newton's death, J.Boag & Son has compiled an album of all the photographs he has taken for J.Boag & Son," Mr Adams said yesterday.

"It was never J.Boag & Sons intention to use one of the photographs entitled `Man's Arm' in our campaign. It has merely been included in the press album to showcase all of Helmut Newton's work.

"There are no plans for media placement of this image."

Mr Adams said the brewer's next campaign would feature a different photograph taken by Mr Newton, and it would be, "consistent with the photographs used in the past by J.Boag & Son in advertising James Boag Premium".

"Our new James Boag Premium advertisement continues to build the intrigue and mystery around 'Who is James Boag?'" he said.

The brewer moved to issue a "clarification" statement on the intended use of the Man's Arm image yesterday, after the State Liberals announced in Parliament that Boag's had agreed to withdraw the advertisement.

"Particularly in the week of the AFL Grand final, after the very sorry events that have occurred involving some members of some football codes this year," she said.

Ms Napier said the Man's Arm image was demeaning to women and it would send "all the wrong messages". 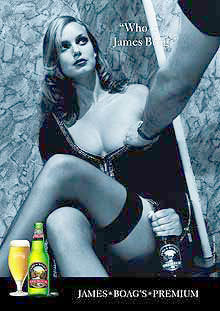 thanks for the image. I only caught half a second of it on the news the other day.
M

I dont see anything wrong with that.
K

Somebody needs to teach her how to hold a beer properly!

There's a beer in that picture? I didn't notice.

They should be a shamed of themselves. She should have poured that beer into a glass!