>This was originally shown on BBC TV back in the seventies. The late
>great Ronnie Barker could say all this without a snigger (though god
>knows how many takes). The irony is that they received not one
>complaint. The speed of delivery must have been too much for the
>whining herds.
>
>Try getting through it without converting the spoonerisms [and not
>wetting your pants] as you read ...
>
>--------------------------------------------------------
>
>This is the story of Rindercella and her sugly isters.
>
>Rindercella and her sugly isters lived in a marge lansion.
>Rindercella worked very hard frubbing sloors, emptying poss pits, and
>shivelling shot. At the end of the day, she was knucking fackered.
>
>The sugly isters were right bugly astards. One was called Mary Hinge,
>and the other was called Betty Swallocks; they were really forrible
>huckers;they had fetty sweet and fetty swannies.
>
>The sugly isters had tickets to go to the ball, but the cotton runts
>would not let Rindercella go.
>
>Suddenly there was a bucking fang, and her gairy fodmother appeared.
>Her name was Shairy Hithole and she was a light rucking fesbian.
>
>She turned a pumpkin and six mite wice into a hucking cuge farriage
>with six dandy ronkeys who had buge hollocks and dig bicks The gairy
>fodmother told Rindercella to be back by dimnlight otherwise, there
>would be a cucking falamity.
>
>At the ball, Rindercella was dancing with the prandsome hince when
>suddenly the clock struck twelve. "Mist all chucking frighty!!!" said
>Rindercella, and she ran out tripping barse over ollocks, so dropping
>her slass glipper.
>
>The very next day the prandsome hince knocked on Rindercella's door and

>the sugly isters let him in. Suddenly, Betty Swallocks lifted her leg
>and let off a fig bart.
>
>"Who's fust jarted??" asked the prandsome hince.
>"Blame that fugly ucker over there!!" said Mary Hinge.
>
>When the stinking brown cloud had lifted, he tried the slass glipper on

He was a very funny man, and could probably keep one of the straightest faces in comedy. I used to love the Two Ronnies as a kid.

Apparently he wrote a lot of the sketches, and send them in under a pseudonym so they would be chosen on their own merits.

It's always so sad when a comedian dies, isn't it?

Wortgames said:
He was a very funny man, and could probably keep one of the straightest faces in comedy. I used to love the Two Ronnies as a kid.

That brings back memories. The Two Ronnies... masters of the single entendre

I have heard that Ronnie Corbett will now team up with Johnny Rotten.

"So its goodnight from me, and f*ck off from him"

i am watching you lot 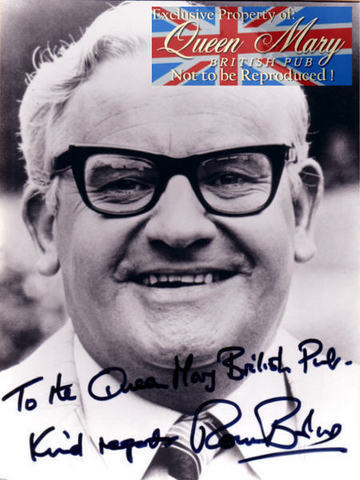