hey guys,
I recently got myself a march pump for AG, but I have found whilst the pump works well when its going, it is an absolute bastard to get started. I have tried hooking it up 300mm below the kettle, shaking, twisting, squeezing the hoses, and to honest it is a combination of all these things that gets it running.
I would like to know if someone out there has found a better way of doing this.

My plan is to mount this pump in a fixed position, but if I have to shake it and tilt it etc, that aint gonna happen. Are these pumps normally so much trouble or am I doing something wrong?

vlbaby said:
I recently got myself a march pump for AG, but I have found whilst the pump works well when its going, it is an absolute bastard to get started. I have tried hooking it up 300mm below the kettle, shaking, twisting, squeezing the hoses, and to honest it is a combination of all these things that gets it running.
I would like to know if someone out there has found a better way of doing this.
View attachment 2628

My March pump can sometimes be a pain to get the flow going. It is normally due to air in the line somewhere, not necessarily in the pump itself.

going by the pic you posted, you have the pump positioned with the inlet at the top and the out let at the bottom. When you open the flow to the pump all of the air bubbles are getting caught at the top of the manifold and when this happens the pump won't prime.

Have your inlet below your outlet so that any air can naturally rise up and out, also don't start the pump until you can see the wort has gone through the pump and is in the outlet tube.

I don't have a march pump, but I had similar problems with my idra and following these basic rules seems to have solved my problem.
Hope it helps.

Hey vl,
They are a bastard to prime. The trick is to make sure that the fluid is running through the pump (by gravity) before you turn it on.
cheers
Darren

You might want to put a bleeder valve on the outlet, open it up until you get water comming out (slowly), then your pump is primed, shut off the valve, and turn the pump on.

If you use quick disconnects on your hoses, you can just unhook the far end of the output hose once the pump is running and direct it into a clean jug. Then lower the jug and the hose until you get a flow. Once you have a flow you can raise the jug and the hose back to where you need it and hook it up while it is still running. The litre or two you catch in the jug can go back in your pot.
B

I've had some priming *hassles* with mine as well, and just stumbled across this post on BrewBoard

Also make sure that you're pump head is oriented so that the input/output are vertical and not horizontal. If they're horizontal you can get a big airbubble in the pump head that won't budge and will lock up your flow.
Click to expand...

This backs up what Andrew was saying so I think I might pivot my outlet housing so it's mounted vertically - I guess inlet higher than outlet.... and see how I go.

Up till now, I've been blaming the large bore tube I've been using.

My vote would be inlet lower than outlet... the bubbles wil naturally rise through the pump that way, and get a kick out of the way when the pump runs.

You gotta love the brewstand!
Is that a burn mark under the keg or do you sacrifice an alien before you start the boil?!

Boots,
To change the orientation of the inlet/outlet is relatively simple.
I would be extremely interested to know which is better. Inlet up or down?
I hate it when my pump gets "airlocked"

You like my brew stand TL? The black mark underneath is getting pretty big i know, but what can I expect when i use a flammable brew stand.

ps. i haven't sacrificed an alien for a long time.

I've actually already had the "Wet End" off to change the orientation.

Re: inlet up or down

I guess the biggest issue would be to make sure that the 180 degree bend / sharp bend is not too close to either the inlet or outlet, and other than that it shouldn't matter .... Unless, if the inlet is up .. when the air bubbles flow out, they will go back up through all the strike water and HLT / Wort and Kettle - risking the much debated [scary] Hot Side Aeration [/scary].

Just to back up what's been said here. Boots and Andrew nailed it.

The ideal orientation is with your inlet and outlet in the vertical arrangement. I find it best with the inlet at the bottom, that way when I open the outlet (I have a bleed valve on the outlet) the pump fills from the bottom ,pushing all the air out ahead of it upwards.

As long as the pump is situated at the lowest point you should be able to fully fill the pump housing with water/wort into the outlet pipe. The bleed valve makes this easier but you could also just disconnect the outlet hose (at the furthest end from the pump so you dont have an air lock in the outlet pipe-thus allowing it to fill (if you get my drift).

I have found that the biggest problem with the march pump setup is that it sucks air from the outlet pipe into the pump which immediately stops it pumping. In the meantime I have resorted to using the HLT as a purge tank to flush the trapped air back into the kettle. However I am worried about causing oxidization of the wort. by this method.
I think the best fix will be replacing the tap with ball valve that protrudes horizontally allowing the air to rise upward and outward.

If I haven't posted this already: http://www.marchpump.com/documents/Installation.pdf

Well, this topic is growing day by day.

I originally mounted my March pump vertically ( see pic) with the inlet and outlet above the electric pump.

This was incorrect according to the instructions that were received with the pump as the direction was to mount the pump horizontally.

I have recently rebuilt my brewery and along with other upgrades I have re mounted the March pump to comply with the correct orientation.
I have also added full flow ball valves to all plumbing where I had originally had restricted bore valves and with all these modifications and changes I assumed that my system would be perfect.

The pump is now very difficult to prime and frankly it is a PITA.
I am seriously considering re mounting the pump vertically as I had no problems with it when it was mounted this way, even with the restricted flow from the ball valves.
I dont have a pic as yet with it mounted horizontally but you may view how it was originally mounted. 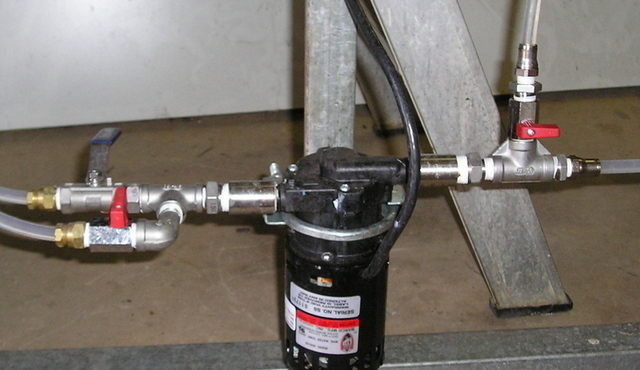 Dicko, I have full flow ball valves as well, which I'm suspecting is half the problem with the priming. Coupled with my large bore tubing, there might be too large an area for the pump to prime (i.e. there is still room for the air + water).

I'll be changing the orientation of the wet section of the pump to vertical (inlet at bottom) but leaving the actual pump body / motor sitting horizontal.

Has any oil / lubricant leaked out when you mounted your pump vertically like in the pic? That would be my concern over an extended time period. Also, my brewery isn't as "technically advantaged" as yours, so I'd be sure to have wort dripping down onto the pump every time I changed hoses etc.
M

Just a guess but it might be the length of the lines:

"All suction piping should be direct and short as possible with as little bending as possible. Excessive bending and pump suction length will lead to flow distortion and cavitation".

The problem with vertical mounting of the pump is that the motor bearings are not designed to support load in that direction, so you could end up wearing them out prematurely.

This is how I've protected mine (my brewery has to get 'put away' after each brew):

although I might rotate the head if (as others have suggested) it will make it 'self priming'.

Hi Boots,
I did not have any oil leak out that I noticed but I only put a couple of drops in each oil orifice prior to using the pump.
Wortgames is correct in what he says about the orientation of the pump and MAH is correct about the inlet etc.
I will try turning the inlet to the bottom and see how it goes. In theory it sounds like that should fix the problem. I'll keep my fingers crossed.
Cheers

P
having trouble getting mkII pump to prime