I have only one word. NO :excl:

Plastic cups for beer festival
From correspondents in Berlin
06mar05

AFTER years of battling broken glass and complaining waitresses, a Bavarian beer garden owner plans to break with tradition and experiment with plastic cups at this year's Munich Oktoberfest.

"We cleaned up almost 26 tonnes of broken glass on the floor of my tent," at last year's beer festival, said Wiggerl Hagn.
"The waitresses won't have to carry such heavy loads anymore. These cups weigh around a kilogram less than those made out of glass," he said, confirming a report in the Munich TZ newspaper.

Mr Hagn said he discovered the plastic cups during a trip to Moscow, and thought they would make a good replacement for the huge one-litre glasses in which beverages are usually served at the annual Oktoberfest.

However he acknowledged there are drawbacks to the new technology.

A dull "plop", rather than satisfying "clink", is heard when glasses are raised and touched together, and of course "tradition will suffer", he said.

Mr Hagn plans first to try the idea out at his own beer garden before risking it all in Munich in October.

"We'll have to wait and see what the patrons think," he said.

I can't wait to see what those patrons think.

Schutzenfest in Adelaide this year had plastic steins
M

Wollongong oktoberfest now uses plastic glasses. I heard that some clown got too drunk and smashed someone with a litre glass. As usual, the minority will ruin it for the majority. Anyway, even though its a bummer, it wont stop me going again!!!, as they also had a dark lager, i think it was a dunkel made by DAB, ray would know, anyway, it was a top drop.

gezz thats how i meet the missus broke a stien on her head in H&B in 91 got her all stunned and groggy and I looked good to her with one eye black and the other closed shut.
how the hell is a bloke supose pick up a woman

Walked past the Mercantile hotel at the Rocks yesterday & was shocked to see everybody drinking out of plastic cups. My first job in licenced premises many years ago was as a glassy. I could have held that position, & taken a redundancy!
Bummer
Gerard
B

the orient serves beer in plastic too, bloody terrible.

As a uni student I'm well used to drinking beer out of plastic. Glad I don't have to do that much anymore.

Geez, not only are they changing to plastic, but the price is going up too.

Beer Prices Going Up at Oktoberfest
By Associated Press
FRANKFURT, Germany -- In Germany, where a good beer is not just quaffed but cherished, the price of doing so at Munich's annual Oktoberfest is on the rise -- again.

Organizers of the annual event said Friday that the average price for a liter of beer inside the famed tents will break through the euro7 (US$8.84) barrier for the first time this year, rising to euro7.06 (US$8.92).

After surveying two dozen groups selling beer at the event in Munich this year, organizers found that they planned to charge between euro6.80 (US$8.59) and euro7.25 (US$9.16).

That's about $12 bucks by our currency for a litre of beer. Not all that bad when you consider that your average pint of something above the norm costs about $8 over here.

That said a German "litre", Particularly at the Oktoberfest is a pretty subjective thing.

Most of the litre steins always seem to wind up at least 1/3 head. Short-pouring at it's finest. So in reality your stein really only contains not that much more than a pint in the first place. 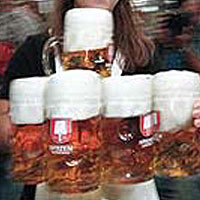 I think you'll find that the litre mark is about 1/4 - 1/3 of the way down the glass anyway. This allows plenty of room for the voluminous head.

As for price,...I got some Hofbrauhaus in Perth a few years back for $20, including the litre glass stein. Refills were $10.50. Compares favourably to the Munich price, eh?

However, I still get pi$$ed off if I get a short pour. There's still a lot of inconsistency in Aussie pubs too.

I recall that I once asked in Adelaide if I could get " a bit more beer under that head. As there are few pubs with pokies (and that IS a good thing), the price of beer is a little higher. If you are paying higher rates, U realy don't want to see a short pour.

There goes my future as Germany's pre-eminent consumer watchdog. :lol:

Excuse the colour in the glass, couple of teaspoons of Worcestershire sauce to give some contrast. Filled to the 1 litre mark. 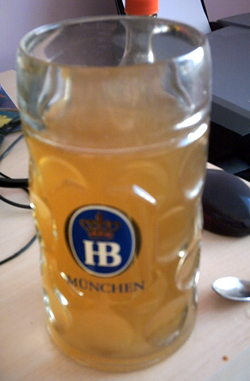 warrenlw63 said:
Excuse the colour in the glass, couple of teaspoons of Worcestershire sauce to give some contrast. Filled to the 1 litre mark.

Warren,
That beer looks like it was straight out of one of my kegs!

Was as bit early in the day for a litre of beer as well. <_<

This brings back memories of me working in a pub in London in the early 90's. The pub was in the centre of the banking district. The glasses had the pint mark which was abot 2cm below the top of the glass. But if you poured the beer to this mark and had the 2cm head then you were abused by the customer for not filling up the glass, and I mean ABUSED. These were guys earning the highest wages in the UK and they think it's alright to abuse a barman so they can get a a sip for free. Anyway, What I'm saying is, if you buy a pint then look at the glass, if that's what you have then why the tight arse complaints?

Bet ya had 2 bite ya lip, taking crap from FRC's, as the Screaming Jets call them...and Pommies too. :angry:

How much psychotherapy did it take to recover, or did ya just start brewing?