I have to report a very ugly incident that occurred on Wed. evening.

I have been told that PET bottles have safety seals that gradually release as pressure builds up & that at worst a PET bottle will split & not explode.

I have also been told to be careful not to overprime & to watch out to ensure fermentation is over before bottling & I'm always very careful about this.

Where I went wrong was I ran a 1056 smack pack & after making a starter drew off approx 500mls & put it in a PET bottle in the fridge for later use.

I sometimes draw off wort from a brew at high krausen & put it in PET bottle in the fridge & regularly release cap to vent it.

I think I vented the offending 1056 starter for about a week, with very little hiss on so doing & then thought no more about it.

On wed. evening offending bottle exploded & in so doing took out a large part of our main fridge & its contents to the point where I will replace it.

The damage was quite staggering for a plastic bottle - I will never under estimate the damage that could be caused by an exploding glass bottle. I have also learnt that it is not only bottle home brew that you need to look out for but also yeast starters.

I will attempt to use the attachment function to attach photos of offending bottle. 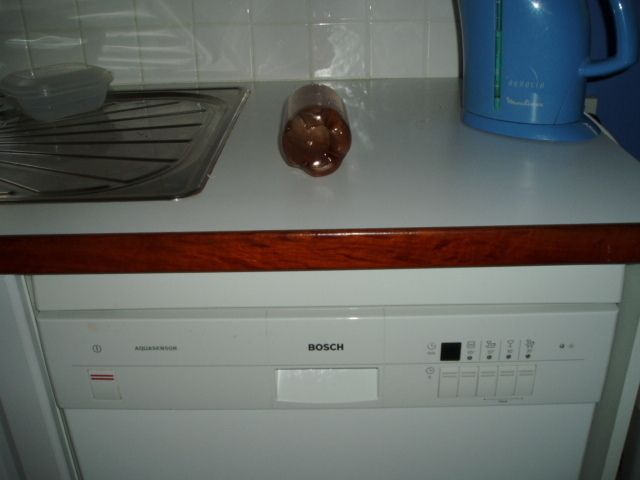 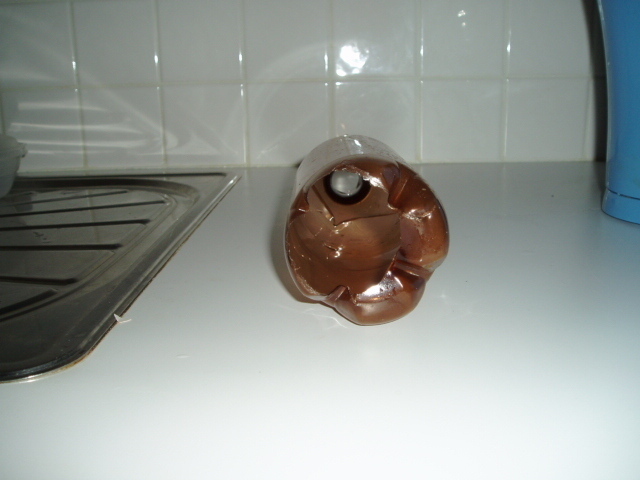 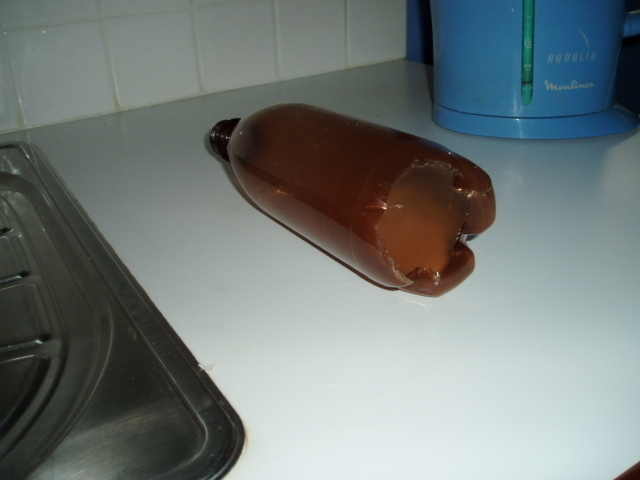 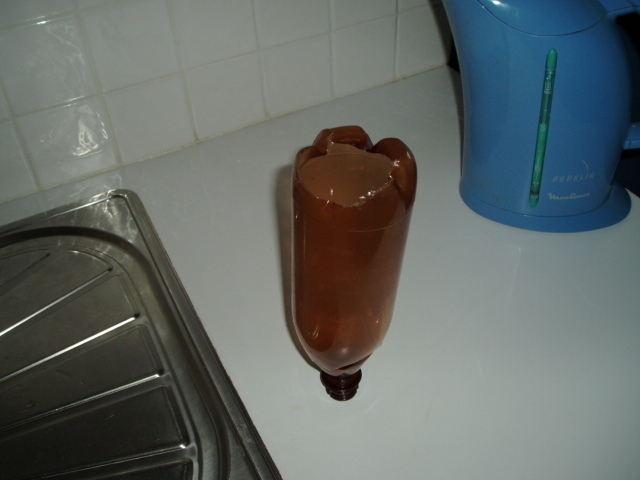 Had a similar experience about 10 yr ago with a semi-fermented ginger beer in a PET bottle.
SWMBO took it out of the fridge one morning and tossed it into the kitchen garbage bin and we thought nothing of it.
We come from work to find the kitchen and dining room plastered with rotting food scraps, sticky ginger liquid and shards of plastic bin.
Got every wall, floor and ceiling and smashed the light globe in the kitchen.
Took ages to clean up.
Would have been very nasty if we were home.
T

Did you take any pics of the fridge?

Jim
Commiserations mate. Its a hard and costly lesson that one. I also keep my starters in plastic bottles (gatorade bottles) and store them in the door of the fridge. I used to release the gas every second day or so...now I just leave the lid slightly loose to enable them to vent without anything else getting in.
Cheers
Steve

P.S. You didnt by any chance rig it so you would be able to get a spare beer fridge did you now????
G

Hmm I always though those plasic suckers were impervious to yeast created pressures, I guess not.

Could be a mad scientist experiment!

Sorry chaps, I did not photograph the fridge.

In fact I did not photograph the bottle til the day after & then only as an afterthought & because I thought people here may be interested.

Now that it has been cleaned out, the fridge doesn't look as spectacular.

Offending bottle was in bottom shelf of the door & a hole was torn in it from the thrust of the blast off. a hole was also blasted on the shelf immediately above by the top of the rocket. This upper shelf was holding a jar of strawberry jam which was itself blasted into orbit by the impact. It was the jam & the yeast starter that was blasted throughout the entire fridge that made the majority of the mess.

PS Steve, main fridge may have to be relabeled!

Jim - that sounds fantastic. Were you at home when your fridge decided to blow up?
Cheers
Steve

P.S. You could re-name your fridge the shuttle!!! :blink:
P

The Country Brewer web site advises to keep starters in a crown sealed stubby in the fridge until needed. Based on Jims experience - isn't this dangerous.

I've always wondered about this. Lager yeast is apparently still working very very slowly at 0 degrees - so couldn't a fully sealed starter build up enough pressure to explode at fridge temp. Or am I miss-reading their instruction ??

Yes, Steve, every negative has to be reversed.

I was home. I was just about to sit down to beef & guiness pie & had just put a fresh bottle of HB in the fridge when the unscheduled take off occurred.

I assume that the jolt when the door closed triggered T-0!

I was storing some bottles of homebrew in my bedroom cupboards and had a couple explode. Everyone thought I was an alcoholic because my clothes stank of beer for about 2 months.

Jim I bet it didnt spoil your beef n guinness pie....god I love home made beef n guinness pies!!! I have heard of people putting airlocks on the starter bottles. Guess that makes sense. Its also a good indication of how low a temperate the 1056 thats an ale yeast still remains active hey?
Cheers
steve

Don't you ferment out your starters before capping?

I just scrunch aluminium foil round the top and sit the stubbies with the fermenters for a week or so before capping and storing.

Obviously not Asher. I thought when you made your 1.5 litre starter and drew off 400mls it had to go straight in the fridge?? Is this wrong? What should I be doing?
Cheers
Steve

Very wise Asher - I shall be leaving caps very loose from now on.

Steve, I was suprised that 1056 was still going at this temp. As I said, I had been venting it for the 1st week. With lager yeasts - I vent them every day until they are used since they'll keep on going until fully fermented.

Those OZTOP's maybe a great idea for this. Use PET bottles but a top with a pressure release valve for safety.

I wonder if the OZTOP's bloke woudl do a special bulk deal for us - for this purpose ??

Also - those cheap garden sprayers have a cheap pressure release valve on them. Reckon you could rig up one of these on a pet bottle top somehow.

or is Paranoia taking hold....

Steve said:
Obviously not Asher. I thought when you made your 1.5 litre starter and drew off 400mls it had to go straight in the fridge?? Is this wrong? What should I be doing?
Cheers
Steve

I agree with Asher, but I also think it depends on how long you plan on storing them. If it is just for a week or two, then some foil and rubber band over the top would be all you need; whether it was fermented out or not would then not matter. Probably the yeast would remain in marginally better condition if it were not fermented out. But if planning to store the bottles for any greater time, my approach is to ferment the starter out fully before capping. Any loss in yeast quality from the extra alcohol is unlikely to be significant, especially if you make a fairly low gravity starter wort,as you are meant to, say around 1030, not more than 1040.

I think quite a few people use Oztops for yeast starters.

I concur with asher, if you're storing starters then ferment them out. After all, the process of fermentation is about converting a microbiologically unsafe product (wort) to a safe one (beer), so it makes more sense to store your starters that way. The yeas will just need re-pepping before use, or replacement of the beer with sterile water for long-term storage.

1/2/21
WeatherWithYou
W
L
What is the recommended lagering process for a true pilsner?