OK I got a digital camera for Christmas.
2 1/2 weeks later have sort of worked out how to use it...and how to post small KB pics to the forum so that TDH's landline doesn't have a hernia (I'm still landline too GT).

Ever thought of making a clear mill so you can see whats happening? No, if you are a normal sane person probably not...
Hopefully attached below are 2 pics of my mill. Its a Crankandstein 3 mill model (look familiar Dicko?) mounted in plastic. The drill stand is simply square tube welded together with height-adjusting screw.

I have digital scales to measure grain, but if you look carefully you can also see typical kilo measurements in texta on the hopper.

Many many thanks to Dave at Goliaths for providing (donating actually) me the acrylic! 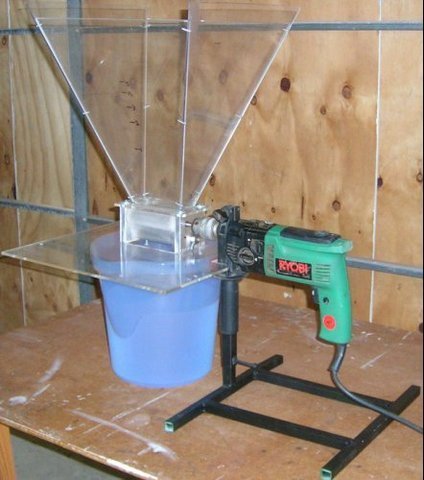 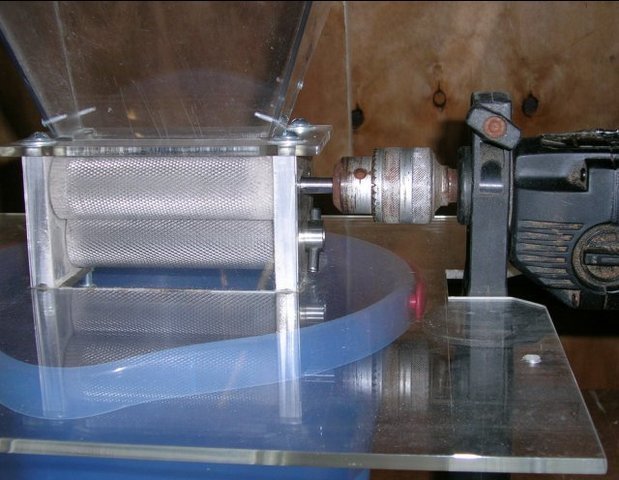 Hi Andrew,
Congrats on the digi cam and what a top job on the mill.
It looks excellent.
I have used mine for the first time last Sunday and boy do they rock!!!!
I have powered mine with a spit motor and I will post some pics on the weekend as I am away tomorrow and possibly Friday with work if the weather is kind.
Like that perspex - good thinking.
Sorta like watching a glass fermenter :lol:

Hey Dicko,
You bet they rock!
And the crush has completely stuffed up (improved) my efficiency
%age...

Style Andrew ,
You could mount the mill in the lounge as a talking point .
do you angle the edges of the perspex or are they cut square .
What glue do you use ?
How do you cut perspex
How do you do the pattern in cardboard first ?
Please explain Gee It looks great!!!

If I put this thing in the lounge room my missus would make my testicles redundant.....

The edges of the perspex are cut square, 2 opposite sides are really thick stuff, the other 2 opposite sides are thinner and ever so slightly bowed in to line up with the square edges. Also adds strength when full of malt, like a bowed concrete dam wall, thats my excuse anyway.
No glue, of you look closely in the second picture there are 1/8" screws holding it together. The thick perspex ends were thick enough to drill and tap a 1/8" thread into the endof it and presto, bolts together.

How to cut perspex? I run it through a triton workbench table saw using a cicular saw blade set at its lowest possible level so it shaves or scrapes through the pespex rather than the blade slamming down into it and tearing it, its all about the angle of the cutting edge to the material.
Mind you, it'll make your saw go as blunt as buggery in no time!

no cardboard template, just did the trig math for angles etc to get the wanted hopper volume then texta onto perspex and cut opposite sides at same time.

The sides of the mill are also enclosed in perspex but due to the angle of the shot and being so clear you can't really see them in the photo.

How Have You Attached Your Pulley To Your Grain Mill?