Sorry these pics have taken so long to get up here. I dont have any of my ones from canada, not that there are many, but when I can get em onto the computer, I will put them up aswell.
First photo off the rank is me at out the front of Stone, behind me are their 2 grain silo's. I think they only keep pale malts in their, cause they have heaps of sacks of malt inside.

Edit Thanks Doc. I just replaced the one left with a smaller one, so it loads quicker. Trent 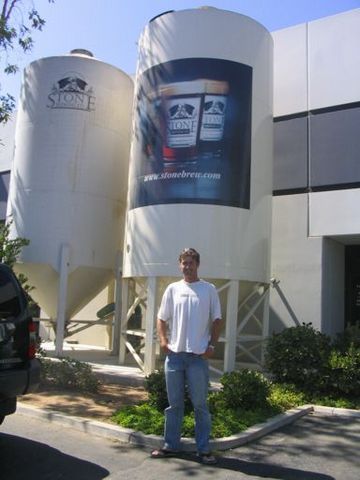 Been looking forward to seeing the pics.
I think the one you tried to post was a little big though and it barfed on the upload.
Do you need some help re-sizing to post them ? If so PM me and I help you sort it out.

Wow
It DID barf on the upload! Thanks for the offer Doc, I will try one more time, cause the missus came home and taught me how to resize. And also, I have discovered that I really want a broadband connection, dial up is as slow as a wet week! Sorry it showed the same pic 3 times my first post, just a testament to my impatience!
Yes, I managed to upload one! I am sorted now
This is me and my mate Blake standing infront of the fermenters at Stone. In my hand is one of their special cask Amarillo IPA's. They only had a 7 gallon keg, so ya could only get one glass. thats where the missus came in handy, she got me a second. VERY tasty.

Photo number 2 is a few guys that were talking to Chris Cochrane (not Greg Koch as I had stated in an earlier post about stone - temporary brain fart). Immediately to their left is the boil kettle, and the stairs the brewer climbs to get to it

Photo number 3 is of the mash tun there. You can see one the brewer for the day to the right of if, and the big hopper above it. The PVC pipe that flows into the hopper comes from right behind the grain silo's at the front of the building where they have their grain mill. Stupidly, I neglected to take a photo of the mill, I am afraid. It wasnt as big as I expected though.

Photo 4 is a little blurry, but I needed to do it without the flash to see the silhoutte of what was inside. It is a 4ft x 4ft cube that acts as their yeast container. I was led to believe it is all slurry in there, which I suppose it has to be. 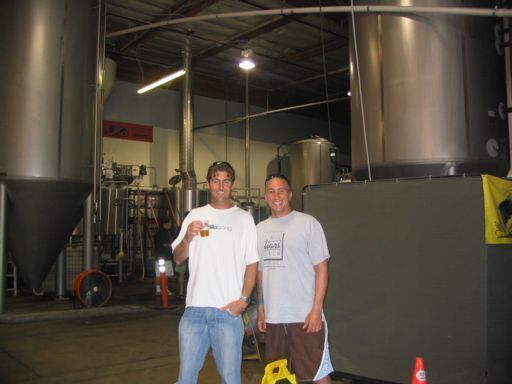 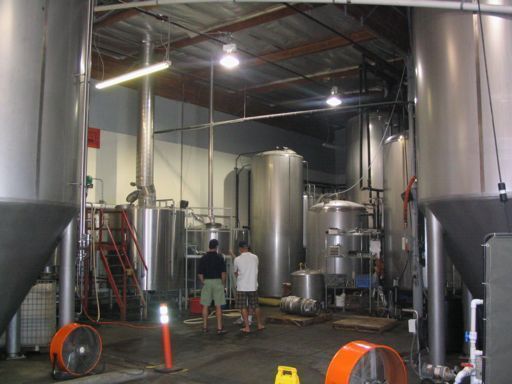 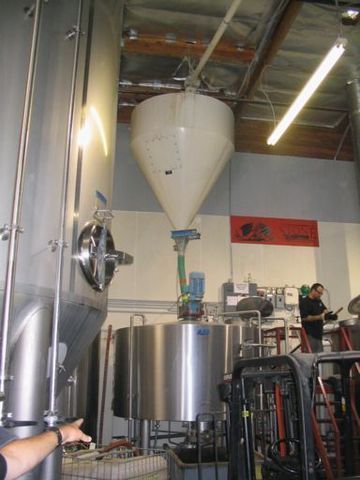 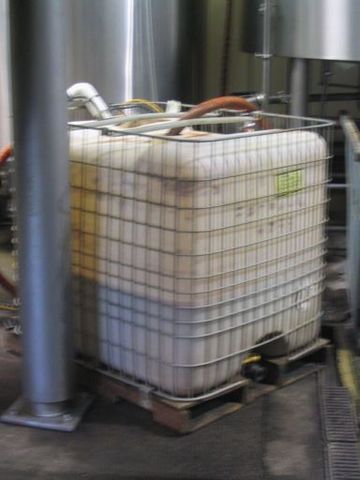 Photo number one, is the brewer for this day weighing out some hops. Not very exciting I guess, I kept missing the action shots of the pellets going into the bucket. It looked like 8 or 10kg going in, I think it was for the bittering addition

Pic number 2, is the brewer drawing wort for a sample, I guess its for a gravity check or something. Once again its a bit blurry. He was actually a very good bloke, he came down and chatted to me about the brews for a bit, but wouldnt give away any secrets! He was brewing a Ruination IPA. He told me he had only been brewing there for 2 months, but I think he said that he didnt have a chemistry or microbiology degree (like most of the brewers I met did). He was saying that they have 3 brewers doing 8 hour shifts, so they are brewing 24 hours a day. As soon as aone beer is in the kettle, the next beer is being milled and put into the mash tun, and when the kettle is finished, beer A is put into the whirlpool, and beer B is put into the kettle, while beer C is being milled and put into the mash tun ad infinitum

Pic 3 is a bit of a look at the fermenters. They are jacketed and water cooled (or warmed I guess) and hold 150 barrels (from memory). A barrel is about 100L. Their new brewery has 350 barrel fermenters that were made in Germany. Last year they put out 36,000 barrels, so god knows how many they will produce in the new place. Incase you were wondering, they are selling everything you see there as a complete brewery.

Pictures 4 and 5 are of the bottling line. It is pretty big and fancy, and they have 4 guys working on it flat out. I think the tour guide said they do about 150 bottles a minute, and it is capable of pumping out 600 bottles a minute. One guy just sits at the blacklight and throws any fractured or suspect bottles on the ground. Apparently not the best place to be walking around bare footed when they are bottling! 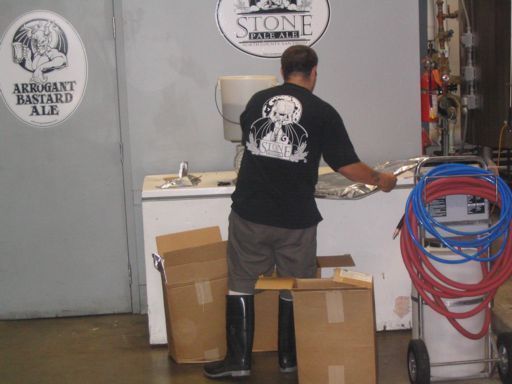 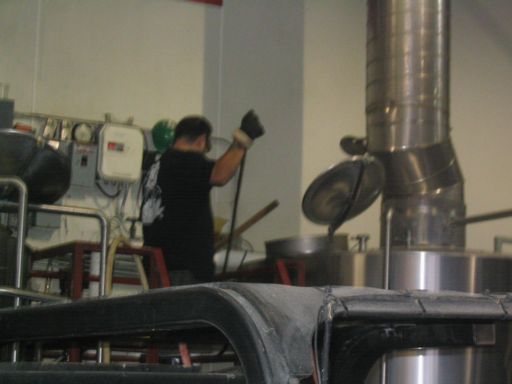 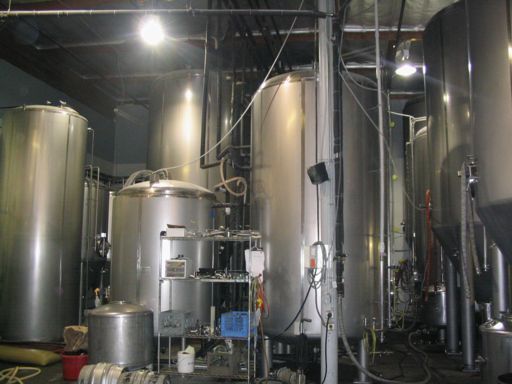 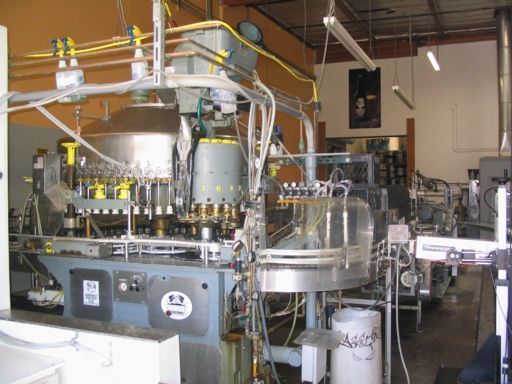 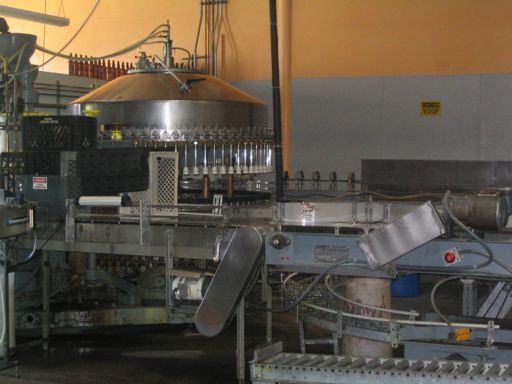 hmmm <_<
Apparently the pics dont go in the order you upload them in, so I will just add the commentary in the ORDER I upload em in, and you will have to guess which is which

There's me, waiting to get my kegs refilled. Can you believe when ya go tasting there, they give it to ya in plastic cups?!? :blink:

Then theres the grain stock that I wish I had at my house. Then again, with that much grain, I would need those bloody big fermenters, and that big mash tun, and kettle. It just never ends with brewing, does it?


Heres me, Tom the Stone lawyers house, sizing my IPA stubby up against his monster 3L bottles. Yes, they were once full, they cost about $50 to buy, and they come with a real padlock on the neck, so ya dont wanna lose the keys! I dunno why they bottle em that big, ya would need at least 3 or 4 friends to finish a bottle of the double bastard. I think 3 litres would kill ya, its a big beer. The IPA could be worth a shot by yaself (at only 6.9%)

The taps at the Library Alehouse in Venice Beach. They had 29 beers on their menu, including chimay and hoegaarden, and it appears Delirium tremens, but I didnt even notice that when I was there! There was another bar with nearly double the amount of beers, called the Fathers Office, but the bartender wouldnt let me take any pictures of the taps . I figured I had better not ignore the orders, or I may have found meself in Guantanamo! I'll see if I can get a mate to send me a photo of em one day. Not a Bud, Coors or Miller to be seen.


Last, but not least, is me on day 34 of my drink fest, sharing a few of the beers I bought back with the guys at the LHBS and some of the local newy brewers (thats me puring the double bastard). they enjoyed themselves very muchly, I believe, though I have to admit that I was a bit under the weather by the time I left. we tried all my beers, then some belgians, a youngs double chocolate stout (to compare to the Phillips double choc porter), then a 15% strong ale from Wiessguy. I had to leave before I shat my liver!

I have some more pics coming when I can get them off the CD our mate burned for us in LA. Hopefully in the next few days, but we will see. You have already seen how lazy I am!
All the best, I hope that ya's enjoyed looking at some of the pics, despite havingmy ugly mug in half of em h34r:
Trent 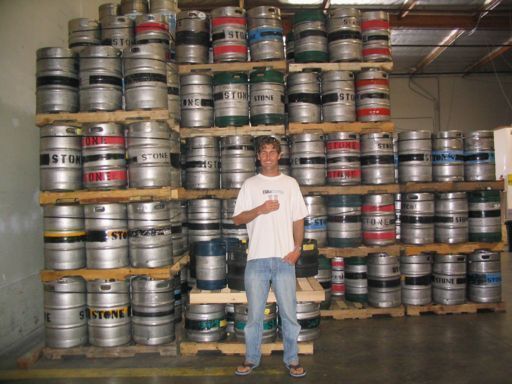 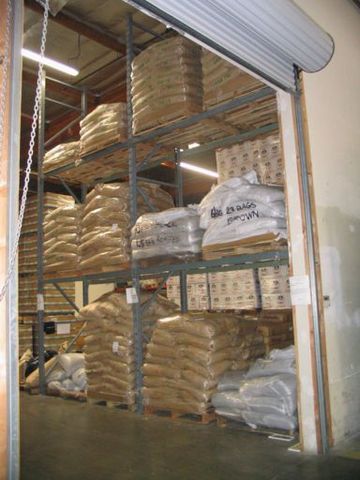 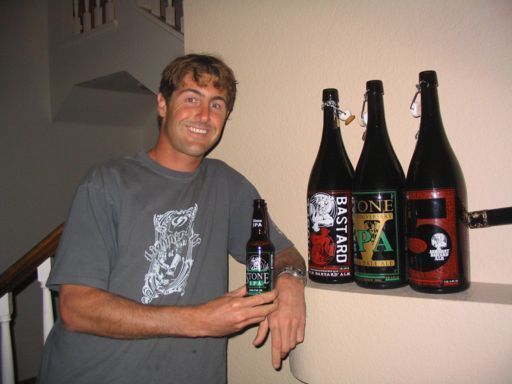 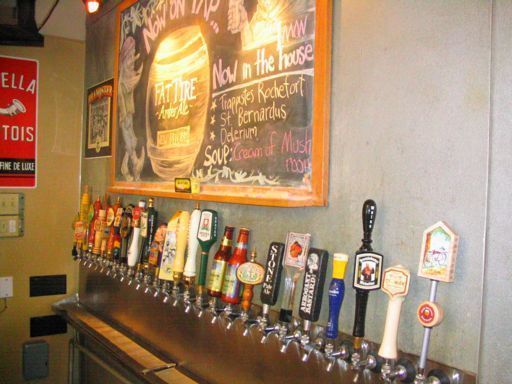 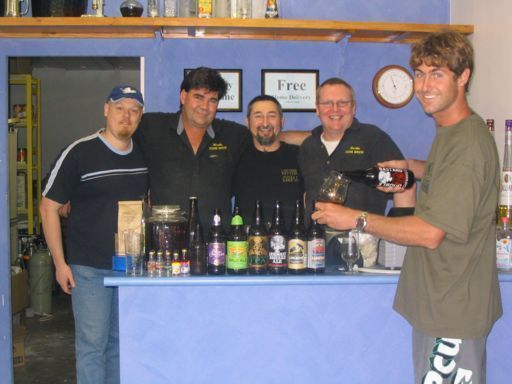 Well done, Trent - great pictures. My mouth is positively watering after seeing that pic in the bar of all the beer handles. I hope you managed to get through them all

Man I want to go to the States, now!

And very nice they were too. Thanks Trent, I still think the Ruination was the standout.

Anyone interested in small breweries should visit, www.australiangoodbeerdirectory.com
For a complete list of Australian small breweries, the site is maintained by Brett Stubs who is an historian at Southern Cross University, he studies brewing history including contemporary small breweries, what a job.

MHB said:
And very nice they were too. Thanks Trent, I still think the Ruination was the standout.

Tried the Ruination at the Great British Beer festival - certainly the hoppiest beer I've ever drunk - bloody lovely, but not a session beer...

N
[Gold Coast] For Sale: 4v electric HERMS and everything else!

For sale - Tas. BIAB and kegging