Had to show someone my new setup so here it is.

200 litre Tucker box
Orignal Thermo removed and Fridge Thomostat installed
Double Font
Beer on one side and bourban and cola on the other
All I need to do now is learn how to make a good brew...lol 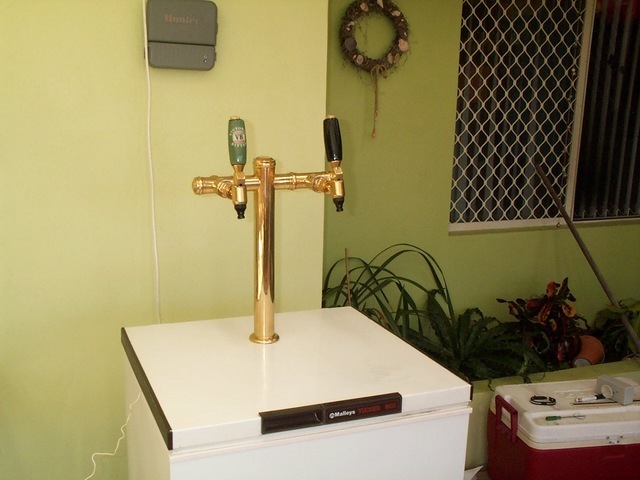 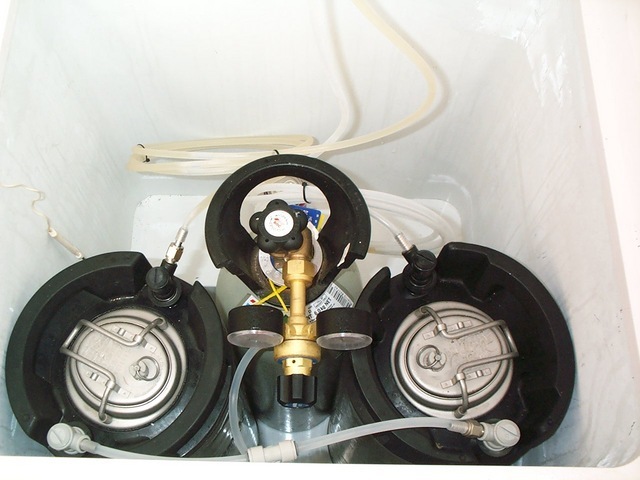 One thing, how do you make bourban and cola in a keg?

Would love to have something similar, beer in one, rum and cola in the other.

Sluggerdog, go and buy bottles of 3 litre coke from the supermarket, or Pepsi if you are a pepsi dude, pour it into a keg, and add however much bourbon you want. A bit of top up gas and you are away.

Great for parties, avoids that 50/50 ratio that happens late in the evening.

I guess the soda stream syrup would work ok too. Just scale up to your 18L (or whatever volume).

Thanks pint of lager, sounds easy enough.. I have found LA Ice mixes bext with RUM, tastes just like rum and cola cans.

Cannot Wait to try this one out as soon as I get my gas and regulator.

If doing spirits and cola do you have to fill the whole keg up or can you only part fill the keg?

This goes for HB too.

so i would have 120ml for every litre of liquid.

Until i start distilling next yer, then it wont be too bad at all
Q

I've considered this and have come up with the following calc's.

Bourbon and Coke @ the local comes in a 200ml glass.
Made up of:
30ml Bourbon
130ml Coke
The remaining 40 ml "head space" for ice.
I've tested these mixes @ home and it's pretty close.


Anyone know of a cheap way of making spirits at home without buying a still setup? IS there a way of doing it with the HB equipment we already have?

the only way you can make 40% spirits is with a still.

you could make some 20% spirits, by using some turbo yeast, and a sugar wash, but i dare say there would be some bad off flavours. But if you wanted to go this path, you could then buy some spirit essence, and give it a shot
P

With a full keg, most of us just burp the keg a few times, that is, put a few bars of gas pressure in the keg, turn off the gas, release the pressure with the safety valve ( or just depress the centre of the gas post if your kegs are missing the safety valve) then regas. Do this a few times and most of the oxygen will be purged out.

With a half full keg, you would need to burp a few times more.

To completely remove oxygen from a keg, fill the keg with sanitiser, and push this out with carbon dioxide, and your keg will be full of carbon dioxide.

I do not know how oxygen affects the cola and spirits mix, but I would assume that it would beaffected by oxidization in a negative way.

As to producing spirits without a still, you can try the ice way, make up some sort of wash, freeze it and remove the ice. If you use one of the turbo yeast style packs, the result will not be very nice as many of the unwanted by products that are usually left behind when distilling will also be concentrated in your end product. The ethanol shouldn't freeze in a domestic freezer, and any ice that forms is water. Or, you can muck around with some sort of solar still, and collect whatever evaporates and recondenses. Have a look at http://www.homedistiller.org for ideas.
B

Makes 13 and a bit litres all up with the bourbon. Just gas it up for about 2 days at on about 300kpa then drop it back to 100 or a bit less for pouring. Needs a bith more gasing pressure than beer i found.

My kids and their mates reckon its just like the RTD's you buy in a can. You can make it stronger if you want but need to be a bit responsible.

Also did one at my daughter 18th recently vodka and Passionfruit.

Again...a big hit with the young ones.

PUMPY...not sure what you mean about "air up type". I'm a newbie at this.
The font is a flooded style but have not connected that part.

Pumpy - I have just purchased a gas bottle from GOLIATH (http://www.brewgoliath.com.au) and my local HBS who is an air-up dealer said he will fill it for me no worries. I also emailed the people at air-up and they said all of their dealers should fill any gas bottle for you.

I would always double check with the HBS just in case he decides he doesn't want to do it but it should be fine.