I want to share a lesson I knew but had to learn again it seems.

My brew rig is gradually adding on electrical control systems. As nearly everyone has seen, the PID is one of the standard modules to enable reasonable temperature control of a process variable (PV) - the thing we're measuring to derive a control response for.

I have PIDs for my HLT(Gas) HLT(Electric) and my MT and went with the entry level Omron units. Short of coin I bought four (one spare) PT100 probes off fleabay.

I mounted the PIDs in my makeshift testbed (a.k.a. wood clamp thingy) and began to calibrate using the input shift function.

The most accurate reference thermometer I had was my wife's ovulation thermometer.
Sure it isn't lab spec, but the tenths of a degree resolution is good and I believe they are relatively well baselined.

Then I proceeded to brew. A few batches in and I'm getting good efficiency, but my ferments are all ending high (APA:1024 from a 1050) (EBW 1040 from at 1100 using well over $50 of yeast including the White Labs Super High Gravity)

I hosted a 60 litre brew day with some boys from work and all our American Barley Wines ended 10 points higher than experience with that recipe would have predicted.

Last Thursday morning I moved my wood clamp thingy to find a part and saw all my temp readings swing everywhere with one PID indicating 'Sensor Error'.

The current these probes generate is in the micro-milliamp range and fluctuations in impedance matter a lot. I remembered that the probes were terminated with crimp lugs and the gauge of the wire was fine.

I severed the lugs, cut back the cables 100mm each, stripped 15mm and connected each wire to their PID terminal.

Following re-calibration and some cable shaking every PID shows the same result consistently. I have perfect correlation over the past 3 days to the ovulation thermometer as well as a hand probe from Hoppy days and the Mashmaster dial I scored with the rubbermaid. Temperature change across each PID is correlated again with 30 seconds.


I brewed Friday and tried my O2 tank for the first time....Fermenting brilliantly and I'm more confident my results will improve. 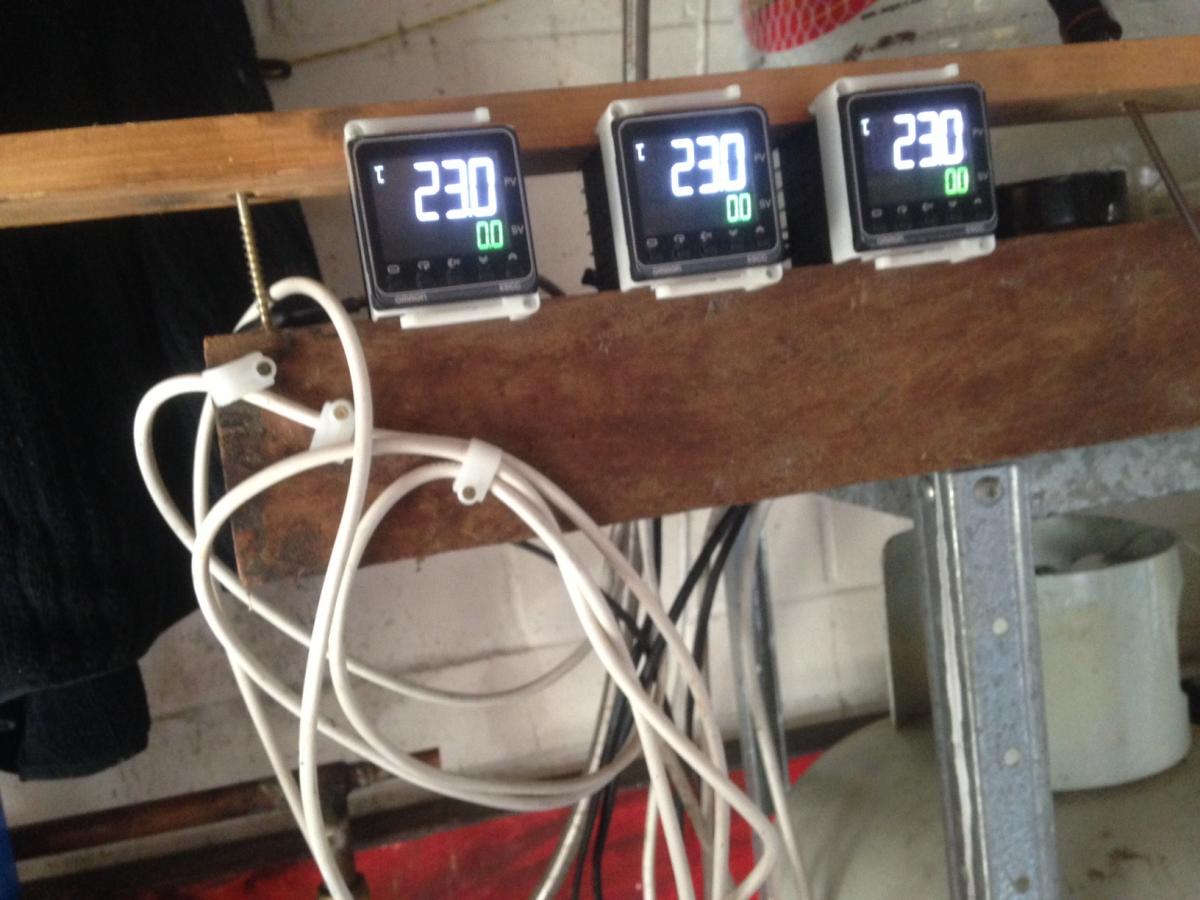 Good post, thanks for the heads up, not far off doing something similar!

If you or any other interested brewers were to check the controller build threads here in the DIY section and on other forums; you'd find a lot of guys will grab the cheaper PID units (they all do the same thing really with the odd exception), for sensors most will go for the Auber units, the ones with the SS sheath will likely outlast the rest of your kit. They are pricey though! Hope your refit has solved the issue and you don't have to spend the coin. Also when calibrating temp sensors calibrate at working temp so for mash 60c and 70c because unless you've spent big money(think thousands each) on gear there will be drift through the range.

Cheers MB, That's good advice. All probes were subjected to a boiling water bath and allowed to drop to ambient over the day. They all stayed together for the whole journey down. What I did notice was the rate of change for each probe. For an impulse change to boiling water there was a response to steady state in 15 seconds for the first probe, 25 for the second and last was slow at 45 seconds. No signifiant drift which is fortunate.

Occasionaly I commission generation plant including sensors to local controllers and DCS. Pricey instrumentation is for the big players. In this game I'm staying on the grounds of a home brewer.

I am on the invitation list for the Brisbane Rockwell Automation seminars. If any Brisbane brewers are interested I could possibly bring along a guest.
M

Awesome post mate!,
I have my HLT and HEx running just off STC1000's and the probes sit in a thermowell, i was considering mounting them into the well with a plug but i think i will reconsider now.
When is the Rockwell seminar on? are the Seminars heavily E&I based?

No current invites MickGC and they range in content.

A quick check on the Events Calendar and it is in Sydney this year.

Edit: It would be interesting if anyone in the Rockwell group has built any brewery control systems, I'll try and ask later this week. A mate of mine works at http://www.fibreking.com/ and he commissions some interesting plant all over the world.

If there are any AHB brewers in Brisbane that are fortunate to have a reference thermometer then I'd really value a chance to see how my gear behaves across the whole temperature range of my brewery.

B
Equipment For Sale Robobrew/Keezer Set Up for Sale