I am trying to find a good easy recipe to make a cider for my wife that would be similar to Strongbow Draught, if at all possible. ( I don't mind the odd snake bite, either). Does anyone have a good recipe?

I've been reading on this site, that you should leave the cider to mature for a month, once bottled. Is it possible to keg a cider? If so, what sort of carbonation should I apply, once the keg is in the fridge? (after the month of maturing). I hope that makes sense. :blink: :huh:

The kit ciders we have tried (Black Rock, William Tell, and that other one I can't recall) have all been disappointing. Thin, watery, and some have artificial sweeteners. :angry:
The best ciders we have made have been done with (expensive) organic apple juice & champagne yeast, with a bit of sugar & nutrient added. They come out like, well, apple champagne. Even when we upped production by going over to Berri juice, they are fantastic. If your wife likes cider as much as Shirley & Tracey do she will be blown away.

3 x 3l bottles of juice, 10g Lanvin yeast, big pinch of yeast nutrient & 200-500g of sugar (honey or brown sugar for flavour, lactose for residual sweetness, and away you go. Let brew for at least 3 weeks, rack once, leave for two weeks then bottle.


Start the yeast by mixing 100mls warm water with 300mls of the juice and the yeast in a jug or bowl. Stir well, cover and leave for at least 30 minutes.

Put sugar, honey & 500mls water in saucepan, warm and stir to dissolve.
Rinse spices, peel & sultanas in steriliser, rinse well in cold water and add to saucepan. Bring to the boil for 15 minutes, skimming off any foam that rises. Cover, allow to cool, then remove spices, apart from the sultanas, 2 cloves & 1 cinnamon stick.

This will take at least three weeks to ferment out. If hydrometer readings over two or three consecutive days indicate fermentation has stopped but FG is still above 1000, add more yeast. Rack at least once.

This can be bottle fermented as usual- 1 tsp sugar or carb drop per stubby- or left unprimed for a still drink.


The "Su-Pear-Eme" Gravy that is on at the moment (in the middle demijohn in the photo) is apple & pear juice, 500g lactose, nutmeg, cinnamon & orange peel only, no cloves. The first batch was so good we had to make another one ASAP.

Can't help with kegging I'm afraid, we put all our cider in green bottles & drink after a month or so. We have some six month old bottles in the fridge for this weekend. 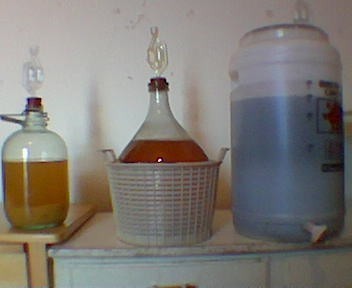 Thanks for the reply.

Did you get the yeast from your local HBS?

What sort of temperature are we talking?

Yes, think most places do it.
It is called Lanvin champagne yeast, about $4 a packet. Brews out to 16% alc. from memory, so your cider will be dry as after bottle conditioning, hence the (not fully fermentable) lactose.

Don't have the pack with me to check temp range but think it is fairly wide- 16-25oC or so.

Just quietly, when you use all juice, especially organic or single variety (ie all Fuji or all Golden Delicious) the final product is a bit more forgiving of minor flaws- the concentrated apple flavour & the high alcohol content seem to mask a world of sins- so unless you boil or freeze it the temp range should not be a huge problem.

What size carboy do you use? 10 litres.

We have a selection of f&*ed up old large bottles & flagons etc, as well as the 10l demijohn. You can find them in op shops etc.

You can see on the left of the pic the weird 6.5l bottle I picked up on ebay for a few bucks.

They are very useful for small batches, not too much headspace. And you can watch. But fitting airlocks can be a bit awkward , and you do need to be handy with the old racking tube to get the final product out.

Backlane's Recipe looks good - but IMHO i hate Champagne Yeast - way too agresive and doesnt leave much left for you - result very dry and thin/lacking body.

U can also add 6 granny smith apples - peeled and cut into quarters in the primary.
Watch out for the sultanas - they normally have wild yeast on them - just blanch or sit in boiling water for a few minutes before pitching them.

Backlane Brewery said:
We have a selection of f&*ed up old large bottles & flagons etc, as well as the 10l demijohn. You can find them in op shops etc.

Hey Backlane! You don't find the flagons out in the "Backlane" do you? :lol:

My one and only cider was done via simiar methods to yours. I used commercial apple juice from Big W. At the time it was at a bargain-basement price of about $2 for 2 litres and just pitched in some recultured Coopers Sparkling Ale yeast.

Good trick that I found to curtail the dryness was to buy a bottle of apple-juice concentrate from the health section of the Supermarket. It's pretty easy to find. You can get pear flavoured as well.

I just added a teaspoon of this stuff to a glass of cider and it made the flavour quite amazing. :super:

honey or brown sugar for flavour
Click to expand...

If you want to be traditional or "authentic", use demerara sugar - widely used by traditional farm cider makers in the Westcountry to replace some of the flavour lost when the Royal Navy stopped selling off used rum barrels cheaply in Plymouth.
Q

Is it possible to keg a cider? If so, what sort of carbonation should I apply, once the keg is in the fridge? (after the month of maturing). I hope that makes sense. :blink: :huh:

This part of Jase's question seems to have been missed. I am also interested in kegging cider.

I kegged a Black Rock cider a week or two ago.

Just needed a bit more carbonation than the ales on tap, otherwise fine (apart from Black Rock cider being a pretty crap kit - can't wait to finish it and get something better in the keg)
Q

Thanks Jaytee.
I will be doing a triple brew this easter weekend to build stocks up a bit. The next project will be a cider probably based on BB's simple recipe but ramped up to a 20 litre volume. Something like:

Not sure about yeast yet - prob just the champagne yeast and see how that goes and then refine from there in future.

GMK is right about the dryness- that was the effect we were after, but it may be a bit thin for some tastes.
Have heard different things about fermentability of lactose, but in practice have found it does help add almost a non-sweet richness, if that makes sense. Buy some & taste it, you may be able to get what I'm trying to say.
Honey & brown sugar work well, though honey tends to take a bit longer to ferment right out.

Apple season soon, we are planning a trip to Harcourt in central Vic to get some good farm pressed juice.

I've never kegged cider (I haven't kegged anything!) - but I did make a nice cider a while back - has ended up nice and dry.

Used a Black rock cider kit as the base and used as perinstructions but added 5L of apple juice that I juiced. Tossed out the yeast that came in the pack, and used a Levin something - the specific is blurred in my book because of spillage! All made up to 20L with water. Primary, then secondary until clear and bottled.

U can also add 6 granny smith apples - peeled and cut into quarters in the primary.
Watch out for the sultanas - they normally have wild yeast on them - just blanch or sit in boiling water for a few minutes before pitching them.

Hi GMK
How long does the wyeast cider yeast take to ferment?. I have one smacked and ready to go and plan on pitching it tonight after work into 12l of bottled apple and a bit of pear juice. I have pure O2 to give it a kickstart and can also add a bit of yeast nutrient, does the wyeast stuff need rehydrating?

What effect does the granny smiths have?

Am I being too hopeful to get it fermented out in 20 days? I will be kegging and force carbonating thanks to my new .5 micron airstone so that will be only a day to get it fizzy. Also what temp would you recommend to ferment at? its probably going to have to sit in my laundry (22-26C) as my fermenting fridge is full.