So I built my kegerator out of a 90L freezer, cut half the foam out of the sides to fit in two kegs. It has far less insulation than the original freezer so I was concerned about ongoing energy costs. If it was going to cost several hundred a year I would have abandoned it for something different.

I bought one of these ebay energy meters to find some facts for me.

I ran it for 5 days before the missus turned it off and wiped the memory. The room temperature was 20-24 degrees for three days and 24-28 degrees for two days, so probably working harder than it would average over a year.
Over the five days it used an average of 0.28kwh or around 6.5c per day (i.e. 50c per week).

At 50c per week I don't even consider it an issue. Even if I only pull one schooner a week this is worth running. 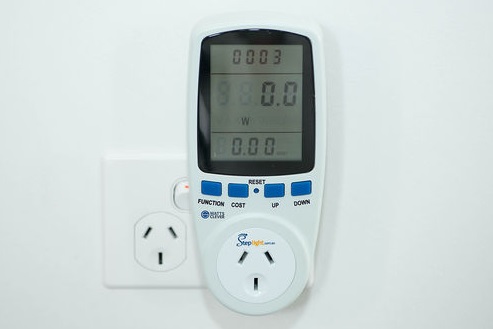 Freek there was an ad campaign here a while ago saying to save money and energy switch off the second fridge - but I had to ask what do I do about the 3rd and 4th? Keep it going and enjoy the benefits of pouring a coldie rather than opening a bottle!

I'm not saying your wrong, I know nothing about electrical usage, costs and what not but $24 a year to run that fridge seems bloody cheap

I posted all my power consumption findings in this thread. I found a lot of them were actually close to the manufacturers KWhr/yr claims, but I never found any that used under their claim. The Westinghouse site is a great check for power usage as it lists the claimed KWhr/yr for all it's fridges/freezes. If you are using a converted freezer running at fridge temperatures it will use less power, I found it uses roughly half the power. Also a straight fridge will use slightly less power than a fridge with a freezer section. In the OP fridge being in a closed in area within the bench and not having any space around the fridge for the heat to dissipate I would expect I higher energy than normal usage. Using this 100L bar fridge as an example is rated at 204 KWhr/yr. At 25c per KWhr (local power cost) that's $51 a year. I believe the OP setup as a freezer uses 413KWhr, so using the half rule, puts it on par with the bar fridge example I used. Even at $51 a year I still rate it pretty cheap to run. I would be interested to hear if the OP keeps getting such good usage long term.
F

Interesting post Kev. It is good to see actual numbers. It looks clear that small, converted freezers are the go.

You guys have got me questioning my measured values. As I said the missus turned it off half way through the experiment, but I was checking the readings each day and celebrating "this only cost me 7c to run today".

I will run the test again but not this week as I am swapping kegs over and making adjustments.

It would be a good time to also measure whilst swapping kegs etc. Swapping out kegs will be a factor at the end of the year power usage.
B

how much for the power measurer and where? ebay?
cheers
pat

This is the Belkin Power Monitor I'm using. I picked it up for $20 from Grocery Run

I did have one that Jaycar sells a few years back and it was no where near as nice. It was crappy to reset, and uses a Chinese logic menu system. "To chunge enurgy unit cost, if it's a thursday then stand on left foot whilst patting yourself on head and press buttons 7 and 23 for 3 secs. It also died not that long after I got it and I had lost the receipt so bad luck QldKev.

The Belkin is easy to use. What I really like about it, is it starts in real time mode, so things like actual watts drawn. So if you want to see the standby watts of things like your tv you can just walk around and check them. If you leave it plugged in for an amount of time it changes into the averaging formula. Basically it works out the average over a 365 day period. It doesn't matter if it has been plugged in for 1 day, or 4 days, it will still average the usage automatically for a year, which is very handy for items like fridges.
F