A model plane enthusiast himself, Mr Cannella has been putting on shows at Barkston Heath near Grantham, Lincs.

"It is just the wheelchair with the engine bolted on the back and steering on the front," he said.

"Originally it was a gimmick. I had a jet engine and I was going to put it on a go cart.

Giuseppe Cannella
"But the missus says put it on something unusual and so I put it on the mother-in-law's wheelchair," said Mr Cannella, who is from Luton in Bedfordshire.

"She was on holiday at the time so she didn't know what I was doing until she came back.

"She actually thought I was doing it for her."

Mr Cannella's mother-in-law, who had bought a new wheelchair, has Parkinson's disease.

Her son-in-law has been collecting money for the Parkinson's Disease Society and hopes to collect up to 1,500 during the shows at the British Model Flying Association national championship.

"I have done it for fun, I just like going up and down in it," said Mr Cannella. 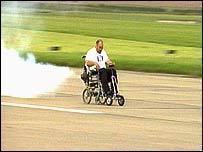