I am brewing my fourth brew and I am not sure it is going well. My three previous brews were all lagers and none of them had problems - i used the same cleaning and sanitation procedures. This brew my first ale (coopers APA) and also the first brew I have used hop pellets. Anyway, i just checked the gravity after waiting 6 days and I noticed that there appear to be white particles floating in the brew. I have not seen these in any of my previous brews. The gravity has gone from 1036 to 1008 and the temperature is around 22 degrees.

Do you think it has gone bad? Or should I just bottle it and see how it goes? Could the addition of hops be responsible for the white bits ? Do ales have more stuff floating in them than lagers ?

Here's a picture, though I dont think it is very clear. I have circled the particles in red. 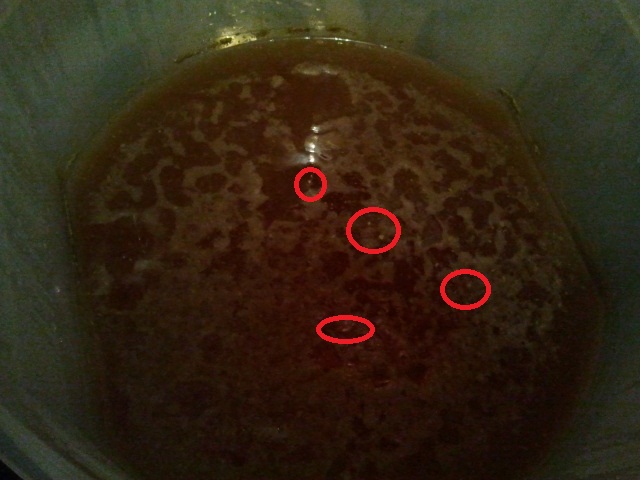 I had lotsa barrels on the old AHB..

Quick....
Shut the bloody lid....
Don't open the lid again...relax..
Your beer loooks fine...
And stop opening the lid looking for infection...you'll make one happen...
in the words of John Palmer..
Relax...don't worry...Have AHome Brew...aka RDWHAHB
Your photo is simply a bit of yeast....IMHO
F

your worrying about nothing if it stinks like arse crack and taste like one then be worried as for floaties I would not worry unless the smell and taste is way off what you expect. Some of the things I seen can be questioned but some of them brews have been my best. If it smells off or vinegar and tastes the same then worry if it has weird floaties then who cares

Okey dokes. It smells the same as my other brews, so I will stop panicking. Thanks for the help.

Not Palmer's words. I always thought it was Charlie Papazian, however when I looked he attributes it to anonymous.

Other then that I agree with you, they should leave the brew alone. In my opinion it should be left to ferment for 2 or 3 weeks.