Ipa And Burton Upon Trent

Using Brewalchemy (Mac) for predominantly Pale ale malt 20L batch, can anyone offer any advice to how this adjustment looks?

Is Ca2+ @ 295 ppm; SO42- @ 726 ppm a little aggressive considering I'm not adjusting sodium, magnesium and bicarbonate into the appropriate ranges also?

I'm not familiar with the software but it looks to me as if you are adding 1.3 grams of gypsum per litre of pre- boil (or post boil??) wort.

Am I reading incorrectly? I know Burton is meant to have very highly sulfated water (or did at some point in history and that water may have been used entirely unadulterated) but that seems like a massive addition to me. What's the total gypsum you are adding to the mash?

Calcium level is on the high end of the recommended range but is probably just OK.

I don't manipulate water according to alleged 'traditional' or historical profiles but 720 ppm sulphate is more than twice what is often recommended for very bitter beers.

To my mind water adjustment should take the following approach:

Yeah it seems pretty astronomical when compared to the ranges in the Melbourne Brewers water treatment article:

Total amount of gypsum would be ~27g. Using EZ water calculator, I should be using roughly half that to be in Palmers range. Anyway here's a clip of the water profile generated with EZ calc which gets me in these ranges for a 50L batch. 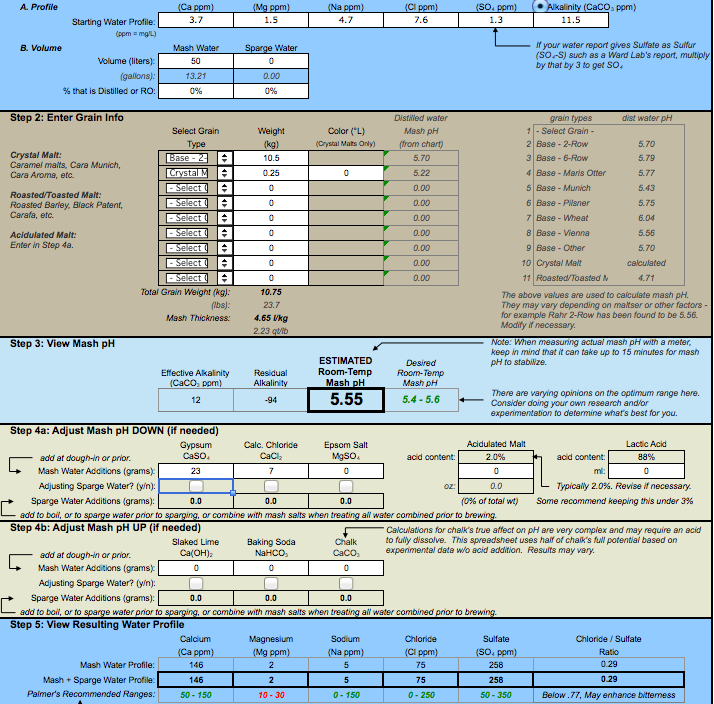 Only one way to see I suppose and that is to try it. As I said, I leave the water profile/famous brewing centre stuff out of the equation with my water adjustment. I think it assumes too much.

I'd be interested to hear how it ends up.
M

Most of my water knowledge comes from reading brewing science texts and trying out things with my own beer. Brewing science texts seem much more cautious about mineralising water (admittedly most of the research is possibly more relevant to pale lager beers) than home brewing references.

I need, for my own curiosity, to try out a UK IPA made with 700+ ppm of sulphate. I would also like to try a commercial example that I knew was made with the same.

The problem I have with 'famous brewing centre' water profiles is that water profiles change constantly and where a brewery takes its water and what it does with it once it takes it is not always taken into account. Burton on Trent for example is supposedly drawn from well water rather than river water, Dortmunder export, despite the local water being high in sulphates and carbonates is supposedly low in minerals due to german brewers practising water softening techniques etc.

So who knows if water profile A is firstly correct, secondly what was actually used, unadulterated and thirdly what will actually make the best example of a beer? Even historically speaking, breweries treated their water, blended it from different sources, etc.

However I have also read historical references (second hand) that suggest the very act of boiling wort can precipitate various 'hardening' minerals, leading to a finished beer that is low in minerals, despite the hardness of the brewing liquor. Maybe super hard water makes great 'soft' beer?*

It's all very interesting and I think a lot of what is available for reading simply scratches the surface. Certainly what I know is just the whisper of the cold from the tip of the tip of the iceberg in the photo on the wall.

*Read some of this in the shut up about barclay perkins blogspot. Also the insistence that dortmunder needs to be made with highly sulphated and carbonated water yet analyses, according to Fix (principles of Brewing Science, 2nd ed) suggest that the finished beer has very little is interesting.

Ah water treatment. Just when you think you have your head around it, something comes along to bite you in the ballsack.

manticle said:
Ah water treatment. Just when you think you have your head around it, something comes along to bite you in the ballsack.
Click to expand...

I basically follow your (Cun--err-- Manticle's) advice - get the calcium within a healthy level (I'm basing that on the Wheeler [?] article), everything else is waaaay down the list. I didn't like the Gordon Strong book much but there is a bit in it somewhere where he (and I paraphrase) states that he'd rather drink a beer with no water additions than one that has been 'overadjusted'. Having tasted first hand what can happen with 'overadjusted' beers I heartily agree.

Funnily enough a couple of them would be drinkable if you started a session on them and stayed with them, but if you tasted a different beer and came back to them they were really unpalatable. Sorry I have nothing much to offer, just an anecdotal observation while killing time.

I usually just take the 'traditional' water profile additions, and then start on the low end - maybe a quarter or half for the first batch - and adjust up if necessary. This sort of experiment will require multiple batches of the same beer with different salt additions. I'd also look at bottling off a few samples of each batch for a side-by-side tasting down the track, then assess which beer you prefer and go with the profile.

Keep it simple is my best advice! Yes, adjust your water, but I feel yeast choice and fermentation temps have far more marked effects on a beer.