Well they say it happens to everybody sooner or later and today was my turn.
I was making my oatmeal stout and when I turned the tap to let the runnings out I got a slow pathetic trickle.
I had to remove half the grains from the tun to get anything happening at all and even then it was very slow.
This is my 5th or 6th ag and i have used the same equipment in about 7-8 partial mashes without a problem in the past, so I was stuffed as to why it shouls stick today.
The only things different today were.
1. I used a urn to heat my water and when it was at temp I let it flow into the tun while mixing it into the grain. Previous to this i would heat he water in a big pot and drop it all in very quickliy onto the grain.
2. I used 400 grams of malted oats.
My efficiency wa scrap as i expected and i had to use 1 kilo of DME to get the gravity up. And by the taste of it I would say its more an oat porter than a stout.
Thougts, suggestions?

i'd say the oats. Don't feel too bad though, i had my first ever stuck sparge in front of a dozen AG brewers at the brizzy brew day.

hahahaahhaahahahahahahha
sorry johnno cant help myself.yep ive had one stuck sparge and its not fun.
i will give this advice and credit thanks to dicko as it was from his original posting that i queried him about it.
try underletting the mash /strike water to the mash.ie if you are gravity feeding with the hlt above your mash tun run a tube from your hlt outlet to the outlet of your mash tun and let the strike water fill the tun this way.it minimises disturbing the grain bed and all you have to do is give the mash a gentle stir to break up any dough balls.

Bad luck johnno , but as you say we all have had one a sometime.
I second jgriffin comments..it would be the oats.

At least you did not have visitors watching , jgriffin , dicko , yep me

wait till you do a 70% wheat beer with no rice hulls.

that is fun :blink:

I get my mash water in the mash tom first and then add the grain to it when i have it to the right temp.

I dont know if this is right or wrong?

i recon it was the oatmeal too, this is the main reason i have not done an oatmeal stout.

I have heard to many scary storries.

I will tell you the other fun thing that can happen........ hop flowers stuck in the boiler pickup.

I have gone to empty my boiler a couple of times with hop flowers and they have blocked it completly.

In with the arm

I have since modified my pick up and put in a small false bottom for when i use whole hops..... pellets are not a problem.

oats=gums. do a betaglucan rest for 30 minuntes and the sparge shd be easier.

Jovial Monk
PS the best way to sparge in these situations, fille the mash tun with water, stir, let settle, bail out the wort. if mash tun spce is too limited, press a colander into the mash, bail out the wort that accumulates in it (stuykmanden)

I keep reading about people using rice hulls. But anyone know where you can actually buy them?

jgriffin said:
I keep reading about people using rice hulls. But anyone know where you can actually buy them?

Grumpys have them. Don't know about anyone local to you jgriff
J

Sorry to hear. It's happended to us all at least a handful of times.

What was your liquor/grist ratio? If your mashtun has the capacity. Going up to about 3lt per kg will help to minimize the likelihood of a stuck sparge. Also make sure you do a mash-out and keep the sparge water and grainbed at about 75c.

Never tried this myself but others recommend a beta-glucan rest for oats (30 mins @ about 45c). It's supposed to dissolve a lot of the starch and gums.

BTW Johnno If you're after rice hulls Grain and Grape sell them by the kilo.

Johnno,
What was the proportion of oats compared to malt?
FWIW, I have had two stuck sparges in over 100 beers.
In neither of the cases could I nail down a cause. Possibly a too fine a crush!
Also, Have made a few wheat beers with 50% raw wheat and never had a stuck one

I don't feel so bad now, my sparge also got clogged a number of time making my oatmeal stout on the weekend. I put it down to a low grain to water ratio and the oatmeal.....in any case it's a good excuse to buy a big esky/cooler

I am still only on partials & put down my first wheat beer yesterday (with the wheat 25% of the grain bill) without any problems. I have made my manifold according to John Palmer's book info & wrap a nylon grain bag around it (the manifold, that is) for good measure. Will this method coupled with a 2.5\1 water\grain ratio still keep stuck sparges at bay if the wheat percentage is increased significantly?. Anyway, it should work ok (combined with the advice on a betaglucan rest) with my oatmeal stout which is next on the list? Fingers crossed.

warrenlw63 said:
What was your liquor/grist ratio? If your mashtun has the capacity. Going up to about 3lt per kg will help to minimize the likelihood of a stuck sparge.

Darren said:
Johnno,
What was the proportion of oats compared to malt?
FWIW, I have had two stuck sparges in over 100 beers.
In neither of the cases could I nail down a cause. Possibly a too fine a crush!
Also, Have made a few wheat beers with 50% raw wheat and never had a stuck one

Thanks for the feedback everybody. Yes this has given me the irrates and I would like to know what caused it.

Warren , yes i have a huge tun and i always use 3L per kilo of grain.

I dont know if this is normal for a stuck sparge but the second batch of in the tun water just flew out as opposed to the initial batch. Had me scratching my head.

I would like to think that its the oats and not the way i introduced the water to the grain that caused the problem.
Time will tell I suppose when I do my next brew.

Johnno,
Did you try "blowing" back the drain?
I wouldn't have thought less than 10% oats would cause the problem
False bottom or braid?

Darren said:
Johnno,
Did you try "blowing" back the drain?
I wouldn't have thought less than 10% oats would cause the problem
False bottom or braid?

Darren,No i didn't even think of that. I was starting to panic i suppose .
I have a braid at the moment. It not the longest , but i have done 6 kilo batches without a problem before.

Here is a pic. 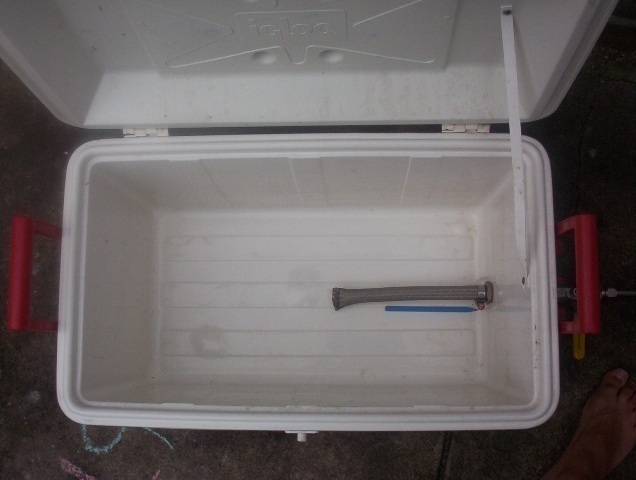 Johnno,
A good quick "blow-job" can sometimes work wonders.
An air-compressor or a blast from your C02 cylinder is the best.
If you are game and fast popping your mouth around it can work but beware it might be hot

Do you add boiling water to bring the mash up to your sparge temp or just add the sparge water to the mash? Your setup is pretty much the same as mine & I found that if I get the mash up to 76 with boiling water & then add the rest of the sparge water it drains a lot more freely. Just topping up the mash with water at 76 gave a sparge that trickled out really slow. Also I wrap the braid in a grain bag like TidalPete says but I think for me that's more of a grind issue than anything else.

Darren said:
Johnno,
A good quick "blow-job" can sometimes work wonders.
An air-compressor or a blast from your C02 cylinder is the best.
If you are game and fast popping your mouth around it can work but beware it might be hot

For the love of brewing!
Imagine the conversation at work on Monday morning.
How was your weekend?
Oh really good thanks. I had to give my mash tun a blow job.
WTF? :lol: :lol: :lol:

Johnno,
Trust me, Use rice hulls for brews you have the slightest inclination you may have a hard time sparging. They are cheap, and really make the day.

I use a RIMS system, and i use a couple of scoops of rice hulls in all my brews as the pump causes compresion on the grain bed and makes lautering painfull. And the pump stops recirculating when the grain bed totally compreses.

I found rice hulls and have never looked back !!!
No grain bill scares me
Oh, i wouldnt tell the guys at work about the blow-job on your mash tun.
Keep that to yourself man.....
Cheers
You must log in or register to reply here.
Share:
Facebook Twitter Reddit Pinterest Tumblr WhatsApp Email Link