Love press releases like this.
Doesn't sound like we will get any down here though.
Double Bastard Ale

Retailers are being asked to limit sales to just a few bottles per person. "People tend to hoard the Double Bastard since they know it's only released once a year," said Stone Brewing CEO Greg Koch. "If some people had their way, each year's edition would only end up in the hands of a few, and thus we have to take aggressive action to prevent such selfish behaviour."

If you decide that you must try and "cheat the system" by following a Stone delivery truck from stop to stop, the brewery urges people to drive more carefully than last year and avoid excessive use of horns and flashing lights.

"Our drivers are highly trained professionals and will not be swayed by either offers of cash or amorous advances" said Koch. "At least we sure as heck hope not. To be safe, we're urging public restraint and asking them to consider purchasing Double Bastard Ale at a local retailer, rather than attempting to gain it by illicit means."

"One of our drivers returned from his route last year completely frazzled due to being followed by Stone fans all day long," said Koch. Evidently, one woman tried to block the truck's path in an attempt to persuade the driver to pull over. After realizing that she was being unsuccessful, the young woman then attempted a form of non-verbal communication that nearly caused the Stone driver to swerve off the road. While he reported that he was very flattered, the attempt did not work. "Thankfully, he is loyal to his wife so his deliveries all got done on schedule. I shudder to think if it had been one of our single guys in that particular truck. Reports are that the woman was rather attractive."

Koch then mentioned that he might have a couple bottles of Double Bastard Ale in his personal refrigerator that might be available for "bargaining purposes," but asked [unsuccessfully] to keep that fact off the record.

Arrogant Bastard Ale has often been accurately described as an "angry" beer with its 7.2% alc.vol. and massive flavor profile. At 10% alc.vol. Double Bastard Ale is a bit "more angry" to say the least. "Those looking for other more descriptive adjectives are welcome to pay a visit to their local library," said Koch. "Besides, most people aren't all that smart and a visit to the library would probably do them some good. Hell, we don't want to have to do ALL the work ALL the time... sometimes people just need to figure things out for themselves."

Nonetheless, laggards and lazybones can learn more about this perplexing subject by visiting the official Double Bastard Ale portion of the Arrogant Bastard Ale website at http://www.arrogantbastard.com/db2003.

Stone Brewing is located at 155 Mata Way in San Marcos, CA and recently made the 2003 edition of the Inc 500, which recognizes the 500 fastest growing companies in America. Arrogant Bastard Ale is currently distributed in 18 states. For more info, go to www.stonebrew.com, www.arrogantbastard.com or call the brewery at (760) 471-4999.

Sounds F*cking brilliant.
What a great way to advertise your product.

Well folks, Last time I was in San Diego I had some of Stone Brewing's products. They most certainly do not disappoint. Quite the contrary-- they are in fact awe inspiring beers of enormous proportions! They are so thick with malt that one has to chew before he swallows each delicious mouthful. The hops leap from the glass, grab your olfactory and smack it around like a pathetic little rag doll. The bitterness is sharp, crisp and deep and is more than adequate to balance out the tsunami of malt. The dense, foamy head is thick enough to float a quarter on top and when the glass is drunk, the dried belgian lace clings to the side of the glass with such tenacity that it must be removed with steel wool. Yes my Aussie bretheren, these are beers with some HUGE BALLS! And I tried the IPA, Pale Ale, and the flagship Arrogant Bastard Ale. I can only imagine what a beer twice the strength is like.

Unfortunately, I live on the east coast and I seldom venture over to sunny California 3000 miles (4,828.02 kilometers) away. Can't get the nectar here but I'll always have the memories.

Holy crapola! I just found out I can get it here! Well, about an hour away in Southpoint, Ohio-- Right across the Ohio River from where I am going to nursing school. I'm in the area twice a week!

Hey, can I mail beer to Oz? If I can I'd be happy to if any of you blokes want to pay for the beer and shipping. Geez, that would be expensive beer eh? I think I'll go to fed ex and see what it would cost to ship a six-- just for kicks.

OK you are going to love this. Shipping a six pack via US postal service to Oz would cost about $33 US. Shipping via UPS would cost a whopping $88 US. I did not even price FedEx. Last I remember, a 22 oz bottle of Arrogant cost about $5.00 with tax and all times six = $30US plus shipping brings it up to $63 US. Converted to AUD would be about $88.10 Australian! What do you say guys? Anyone up for a $100 six pack??? I didn't think so. But hey, it was a great way to waste time! Looks like it will be a while after all before anyone down under tries any Arrogant. Do not dispair though! I am looking for a clone recipie as I type this.

okay I found a clone. I am posting it in the recipies section. I will try it and tell you if it close to the real thing.

OK folks, I went to the beer/wine carryout in Southpoint Ohio today. Wow! they have a selection like few others I've seen. Bad news is the were out of Arrogant Bastard. Good news is they DID have DOUBLE BASTARD!!! This is a limited production ale as I understand it and I did not expect ever to see it east of the Rocky mountains. Bottom line is I have some and I will be tasting it tonight with a friend in our weekly "Beer and Politics" session. I will post our tasting notes ASAP-- or whenever the hangover wears off.
:chug: :blink:

WOW!!! This is one of the finest beers I have ever had in my life! This blows the Bastard out of the water. Tasting notes below:

As soon as I popped the cap I was greeted by the smell of malt. Poured into a wiezen glass. The color is dark copper-- a little darker than a good IPA, the head dense and firm. A little on the hazy side.

My nose was greeted by a malt aroma unlike any I have experienced. It was almost like the aroma of a freshly opened can of unhopped light malt extract syrup! Insane considering this stuff is already fermented. Once the shock of the intensity of the malt subsided I began to notice a spicy, floral hop aroma and a slight fruity smell. All these smells were very harmonious and very intense and quite unique. A symphony of smells!

First mouthful I am bludgeoned by a huge hammer of malt swirling with flavors of apricot and a bit of cardamom seed, a little citrus, slight "orange zest" beautifully balanced with copious amounts of hop bitterness, still leaning slightly toward the malt. Hop flavor abounds very floral, like a good tettnang and ever so slightly peppery. Heavy on the pallate, tons of body, chewy. Now I begin to notice a slight warming sensation. I am still reeling from this monster of a beer. Harmonious, complex, indescribably delicious.

As I swallow I am struck yet again, by this big malt flavor. As it goes down the hatch I really feel a warming sensation and the high alcohol content of this beast really begins to make itself known. The finish is sweet and heavy and a sharp, crisp hop bitterness right at the back of the pallate finally asserts itself and shoves the malt down my throat leaving a crisp, spicy refreshing bitter edge. As I exhale, I feel the ethanol's warm personality taunting me, begging me to imbibe yet again.

So you know what? I did just that. Again and again and again until the entire contents of the bottle was safely in my stomach. I can't wait for another. I guess I'll be going back to Leo's beer/wine carryout again next week.

Is this beer worth the experse of having a bottle shipped to Oz? I hate to say it but you bet your ass it is!

You bastard.
Or is that your Double Bastard.

If only some of the breweries down here had the balls to make something like that.
I guess that is why we home brew though isn't it guys ?

So I guess we now need a recipe for the Double Bastard Ale :lol:

I'm definitely going to work on one. Screw the arrogant bastard clone. I'm going straight for the juggular and try to clone the double. This is going to be a high mark to hit but I think I'm up to it.

thanx yankee brewer
you will now have most of this forum hanging out to try this beer knowing full well we cant get it.what a bummer.
i would love to try it one day.
oh well i live in hope

yankee, how does this compare to brews such as Three Floyds Dreadnaught Imperial IPA? (9.5%, 100+ IBU double IPA)..

I'm not suprised you found the malt very dominant, its regarded as a strong ale rather than a double IPA.

I've not had the Dread. I have read reviews of it and next time I'm at Leo's I'll ask him if he can get it. It does sound like I might expect a similar flavor profile. I'll just have to find it and try some. I have a friend in Indiana. If I can't get it from Leo, I'll have it mailed to me from Indi.

Maybe we would just have to settle for the AB Tap handle.
There is a nice slate one on eBay at the moment.

The handle is actually a BLACK SLATE!! The beer logo is ETCHED IN THE STONE!! VERY UNIQUE HANDLE!!. It measures approx. 8" high but it is a heavy piece (almost 4 Lb!!).
Click to expand... 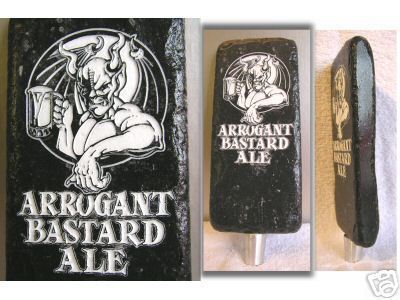 :angry: even a tap handle is bloody expensive for us poor aussies.

I see there is now and online store at Stone Brewing that sells all the Arrogant Bastard merchandising range.

Prices don't look too bad either with the dollar still doing well.