The second AG is now under the belt,

Got home from work Friday, mashed the grain, had dinner, then the fun started..

The space shuttle burner performed well again, sparge water up to temp in about 4 minutes.

I batch sparged twice with a little less water each time, rather than the single batch sparge I did on the first AG. My efficiency was up about 6 points, so I;ll stick to this method for now.

I used Uncle toby's 5 min Oats, did'nt know what the yield would be from these, so I entered it in Promash as Flaked Oats.

A little later in the evening the burner entered boost mode when I was checking the footy score, I looked around fron 15 feet away to see foamy black stout exiting the big hole at the top of the pot then running across the cream tuscan pavers. :lol: ........I ran to the rescue, and without thinking thrust my hand into the boiling stream of wort to turn the engine down....

Pain from the burn B) was reduced with cold water and a several IPA's :lol:

Left to cool overnight, I became paranoid about the yeast I intended to use, so raced of down to the G spot and picked up a 1026 British cask ale, which was ready to pitch, and is now bubbling away.

Later in the day SWMBO pointed out that my car was unregistered, as I forgot to pay it on friday. Luckily did not get pulled over.

Final gravity ended up at what I had planned thanks to the better efficiency, but my volumes were a little out, ended up with 4 litres more than planned, now have 25 litres in the fermenter and 2 litres in a starter for the next AG - Midweek Porter.

If anyone has a killer Porter recipe, please post it. 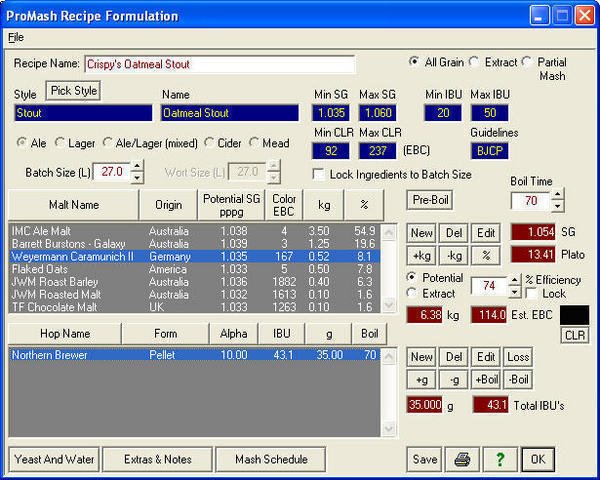 Well done Crispy, I also did my 2nd mash on Friday night. This time i did a 3 X batch sparge and my eff. went from 50%, (using fly sparging) to 74% with the batch. Mine was an Oktoberfest.

Crispy,
Give this recipe a try, it is nice and simple but got me a third place at the Bathurst show.

Well Done - SJW,
you gotta be happy with that increase in efficiency, no more fly sparging for you, I'm guessing.


Cheers for that recipe AndrewQLD, I'll give it a go on wednesday.