Commercialisation Of Belgian And Czech Beers

Just returned from a brief visit to Belgium and the Czech Republic. Sadly not long enough to find all the better small breweries, but I did get some intereting input on whats happening to mainstream beers in those two countries. Belgium. as we know is home to Interbrew, now known as Inbev after the merger with Brazilian brewer Ambev. This makes them the largest brewing group in the world - if size is important.

What I can tell you is this - the Inbev lager/pilsner brands tend to taste the same - ie little malt character and heaps of calcium chloride in the kettle to replace the malt character. Whether its Stella or Becks, you will be hard pressed to tell the difference. Its pretty much the same with their other 2 well known brands - Leffe and Hoegaarden. Locals I spoke to in Belgium were scathing in there condemnation of these 2 in particular.

At the hotel I stayed at in Lemmen (near Beringen) they had 2 beers on tap - Stella and surprise, surprise - Celis White. Yep, this is the same Pierre Celis that re-discovered Hoegaarden, sold it to Interbrew, went to Texas and set up Celis as a brand name and then sold out to Miller (I think). His brand lives on in Belgium contract brewed by Brewery Van Steenberge. Another excellent Abby brewed range was also available at the hotel - Abbaye du Val-Dieu. (www.val-dieu.com) I tried their Blonde, Brune and Triple and loved the triple. Local drinkers also told me that Westmalle was "the best".

Went to a small cafe in Beringen owned by a self confessed "beer nut" - over 100 beers available. He showed us his cellar and then shared a very special Kreik with us from a brewery that closed a couple of years ago. A special Kreik because he said it was "real" - not like the stuff Interbrew make with sugar added to moderate the sourness. He was right - it was a magnificent beer and fermented the old way with natural yeasts. Pic and part 2 to follow 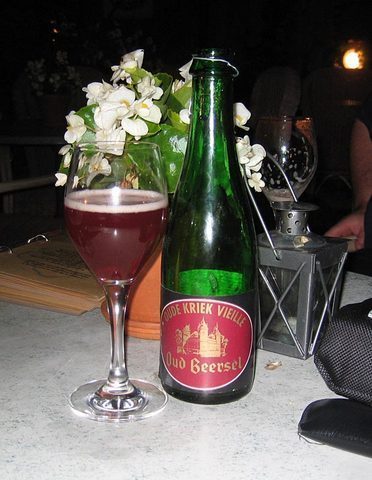 Yes Wes, we are all jealous.