I've started brewing 12L BIAB batches, which means I've run out of excuses for keeping this stuff around. This is probably a good thing, because I was never that comfortable being the guardian of the very gear used by Sauron to craft the 19 Ales of Power. Choirs in your head, running narrative by Cate Blanchett when you hang out the washing, Gandalf calling every other day - 'is it secret? is is safe?' - that sort of thing. 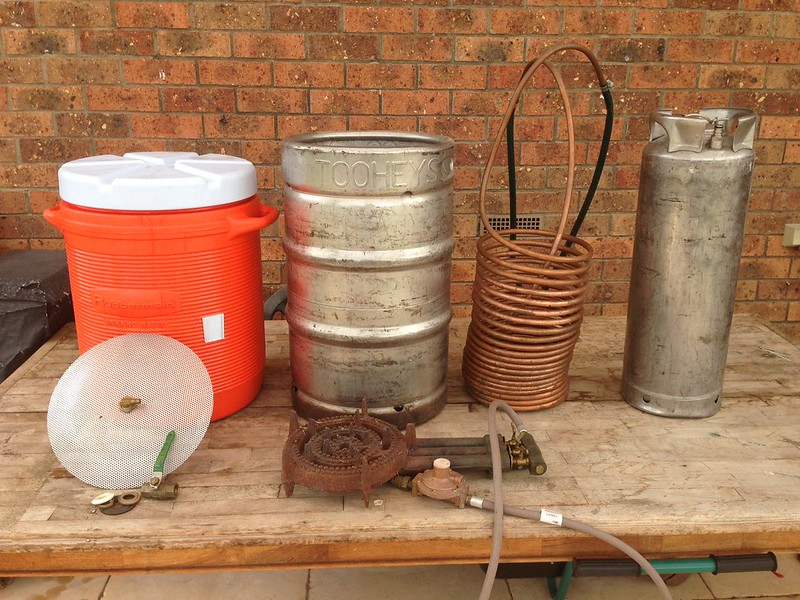 Rubbermaid 10 gallon cooler. This smelting vessel is in fact made from solid gold, and merely looks like orange plastic because it is tainted with Sauron's fëa - pure evil that dripped from his cut hand as he forged this well of souls. The original dwarven plastic tap is lost to the ages. Only a ball valve, marked with the black speech of Mordor (which I shall not utter here) remains, together with sundry washers.

Stainless steel false bottom. I say stainless steel because I dare not catch the gaze of His Lidless Eye, but it's actually made from mithril, mined by the Dwarves in the deep mines of Khazad-dûm. Like all folks, you desire it. Its beauty will not tarnish or grow dim. It conveniently fits the Rubbermaid cooler. You'll need some threaded pipe and a bit of plastic hose to connect the two. No, I don't know where it is. I have misplaced my palantír. You might say that it is not accounted for.

Copper wort chiller. Untouched by mortal hands, this spiral artefact once quenched the very fires of Orodruin. Gaze not into its reflection, for there lies madness. Lays madness? No, lies. Yes, that sounds right.

50L keg boiler. More mithril. It was on sale. What blade hew the top from this mysterious vessel? Mithril's eternal might is evident in the slightly crooked job, that's all I can say. As the elves have no beards, so this boiler has no tap. Put one in, use some tube to siphon, or pick it up and tip it in like a real Man of Gondor. What are you, some hobbit's little girl? To be clear, it's free with the other gear. I don't own it. It came to me. My preciousssss.

Corny keg. Can't remember if 19 or 21L. You'll need to kill this with fire, as it's been used to store the foul ale of Mordor, known among men as 'gueze'. It seems to hold a seal because I made the mistake of opening the release valve. Horrors emanated from therein, a spectral army that even now is hogging my Playstation 3. No, glowing green ones, I haven't bought Shadow of Mordor yet. Please stop asking.

Gas ring. This is also free with the other gear. I dare not sell it. It worked the last time I used it, but today? It could summon Balrogs for all I know. When it erupts and levels the Shire, don't come crying to me, for you were warned. Forewarned, you were. Warnings, everywhere.

How much for this eldritch gear? I dunno - $200 the lot? Pick up in Canberra. If you're an arts student and don't have a car I guess I could deliver.
F

Any chance you're willing to split the keggle? I don't have a need for any of the other bits...

Awesome listing, Matt.
I'd buy it solely for that sales pitch .... And if you were in Melbourne.

Btw, where did u get the Rubbermaid?
M

fdsaasdf said:
Any chance you're willing to split the keggle? I don't have a need for any of the other bits...
Click to expand...

I'll let the ad run for a while before I consider splitting the gear.


technobabble66 said:
Awesome listing, Matt.
I'd buy it solely for that sales pitch .... And if you were in Melbourne.

Btw, where did u get the Rubbermaid?
Click to expand...

Thanks . Imported in the mid-2000s together with the false bottom - can't remember the original supplier - Listermann, maybe, or Morebeer? I do remember it was bloody expensive.

Matt said:
Thanks . Imported in the mid-2000s together with the false bottom - can't remember the original supplier - Listermann, maybe, or Morebeer? I do remember it was bloody expensive.
Click to expand...

Yeah, bugger.
They're ridiculously expensive here, but they seem to be a dime a dozen in the States, or even asia.
Bit disappointing no-one here imports them more competitively - i would've thought with a rubbermaid and a magnetic pump you can easily convert any 1V BIAB setup into a 2V recirculating mash-bed setup. Nice simple improvement (re: cash & space -wise) in 1 fell move - if the 10gal rubber maids were the kinda price they are in the US.
i wonder if FullPint have looked into it...
Thanks for the response.
Good luck with the sale!
T

Hey Matt I am the wielder of the Flame of Anor I need this gear for protect all this world from the balrog!!!!

Why for you not be in Victoria?
F

slcmorro said:
Why for you not be in Victoria?
Click to expand...

Because Mordor IS Canberra, and you reside in the far kingdoms.

As for the post. I laughed, I cried, I purged. Someone needs a hug or other human contact, or maybe just a good game of D&D.

Will you be sharing the little pieces of papier soaked in cane toad sweat you've obviously consuming?

The thing is you need to make a sandwich.

The first layer is a square about the size of a centimetre, cut from a page of Tolkien's The Silmarillion, glue that to a slightly smaller square from James Joyce's love letters to Nora, dust hetween the layers with the powder taken from dried cane toad sap, and then find another centimetre square piece of paper, from either the book of Mormon or the book of death. Whichever is easier to find. Glue them all together with cyanoacrylate. It should yield something that resembles a tab of something I probably shouldn't mention.

Of course you could just skip the deal with satan down at the crossroads and live a normal life, but where is the fun in that?

(slightly more) Back on topic, you could probably run an ad for this equipment during the movie on TV tonight. LOTR -Part II, isn't it?

Did all this get sold?

But I'm not sure if I need this stuff or not! I current BIAB in urn, and I suppose there's half a dozen ways I could expand...
F

I dropped matt a pm yesterday morning because I'd be dead keen for this kit. I'm also in Canberra.

He could be lost in Mordor for all we know.

Yes it's a nice range of stuff. Given my tentativeness vs your dead keeness, I hope you managed to score it all!
M

Crikey! Nothing for ages, then a flurry of replies - right at the moment my home PC decided to cark it. (I'm all better now.)

Noooooooo!! I woulda taken the whole thing. Doh. Saw this too late.
M