Have just returned from Europe, and have a few photos that maybe of interest, and hopefully may inspire others to make the pilgrimage. First up are a few snaps from Cantillon. I'll add a bit of info to the pics as I unpack (returned home to find that our unit had been broken into and used as a junkies shooting gallery whilst we were away, the police have been great and at least our computers were not taken or trashed.).

Cantillon in Brussels is a family run brewery which for 3.5 Euros you are free to roam and includes a tasting at the end of the self guided tour. The family are very friendly and will field any questions you have. The brewery makes tradition lambics and lambic based fruit beers, they try to use organic ingredients where possible.

Beers we tried:
Gueuze: blend of 1,2 and 3 year old lambic, fermented in bottle.

Iris: similar to Gueuze but it is made only with Pale Ale malt.

Lou Pepe: fruit beer (cherrys and raspberries) made from a single brewing session lambic and bottled with candy sugar.

Kriek: two year old lambic that has had Schaerbeek cherries macerated in it for 5 to 6 months (150kg - 500kg). Thirty percent of the bottled beer is a young lambic that has been added.

They produce a numbe of other beers, but they were not all available at the time of our visit.

Rose de Gambrinus: same as Kriek but with raspberries

Vigneronne: same as Kriek but with white grapes

Fou'foune: same as Kriek but with abricots

Faro: lambic which has added caramel and candy sugar proir to bottling, it is advised not to keep this beer much beyond 3-4 weeks as the bottle may explode, (tried a Faro from another brewery (Lindemans, can't quite remember) at the Belguim Beer Weekend in the Grand Place), a sweet and only slightly acidic brown beer. 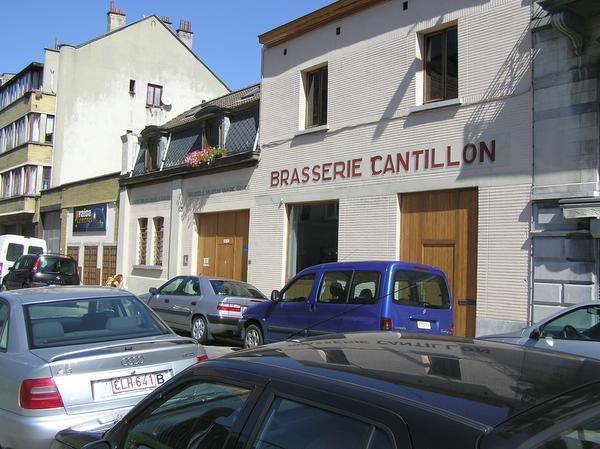 mash tun, inside mash tun and removable false bottom. Grist and hop amounts for a standard lambic as per the guide booklet:

Wheat 35%(450 kg) non-germinated wheat from Brabant
Malted barley 65% (850 kg)
Hops (22 kg) aged Saaz? (not sure if this is correct or not regarding Saaz) and Jean-Pierre Van Roy advised sometimes aged Goldings. 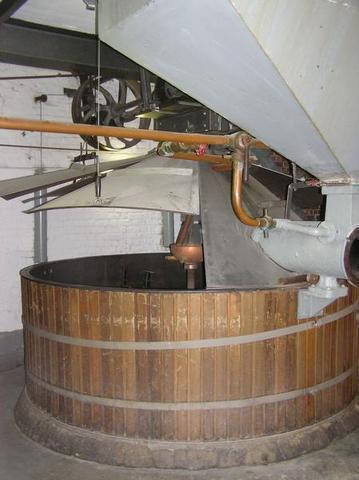 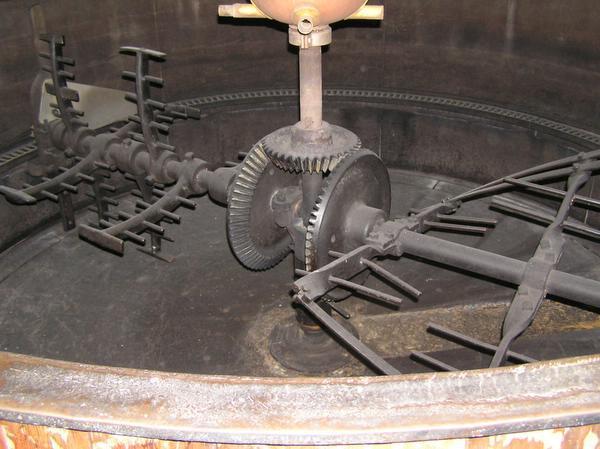 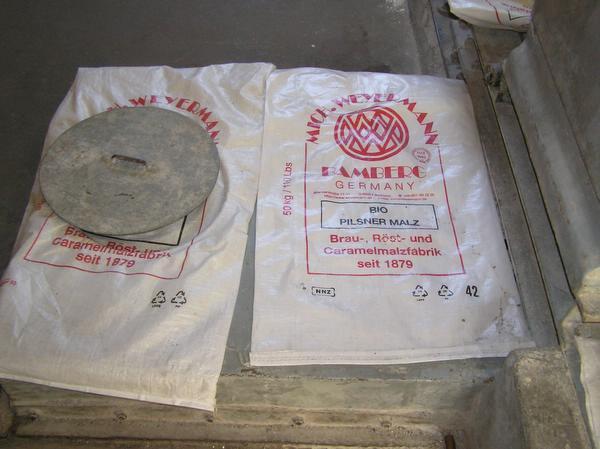 one of the kettles and mill 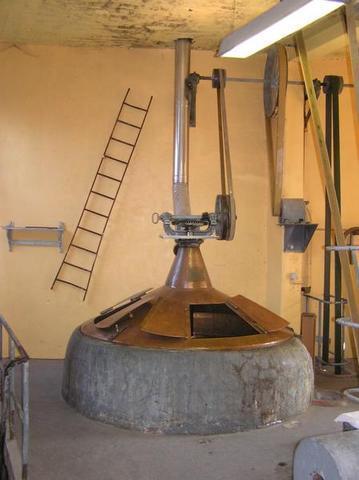 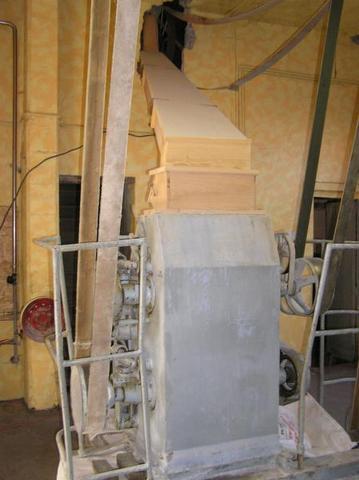 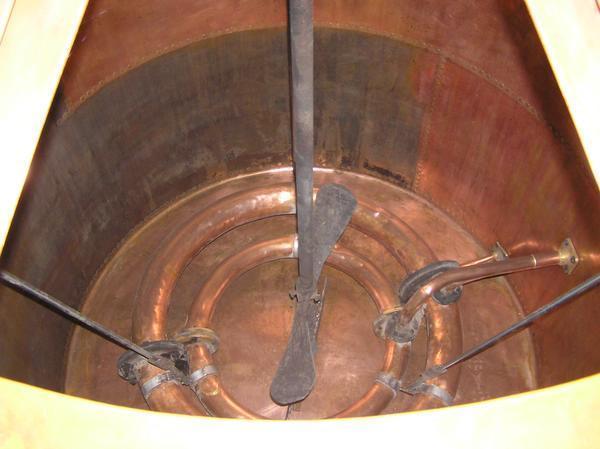 inoculated with a variety of airbourne wild yeasts that are specific to the room ...
Click to expand...

quote from tour guide booklet.
The roof was replaced in 1985 but the original roof tiles where retained under the new roof as they contain the bacterial environment that inoculates the cooling wort. The copper cooler holds 7500 litres of wort and the cooling is done over night reaching 18-20C. Due too cooling requirements, brewing takes place during the cooler months, end of October to April being the brewing season.
Jean-Pierre was assures that lambics can be made even in Australia if the right micro environment is obtained, when he said that I almost asked if he had any spare roofs tiles 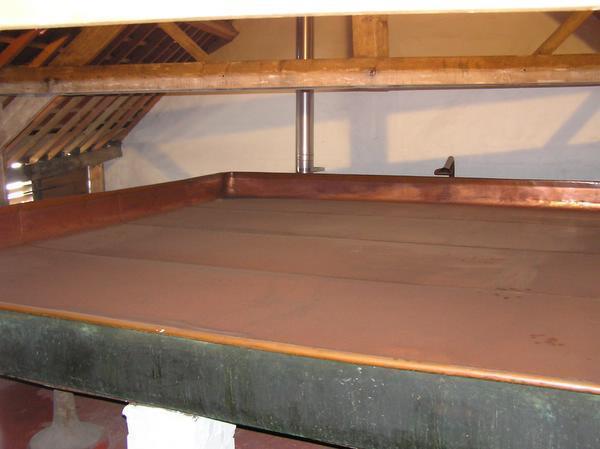 Lou Pepe being blended, a fruit blended lambic (when I find my notes I'll give bit more info) I got to try this in its lambic state (prior to bottling) and in the bottled form. Prior to bottling this beer had a very pronouned fresh fruit aroma and taste, the finished product is more a balance with the acidic lambic beer base as the fruit is not as pronouced.

The barrels are aging lambics at varying stages.

More info on Lou Pepe: I referred to this beer having a lambic state as that is how Jean-Pierre referred to it. When this beer is bottled candy sugar is added for carbonation whereas a lambic is carbonated with an addition of young lambic beer. Lou Pepe's have twice as much fruit added and are made from a lambic from the same brew session (not blended with other vintages). 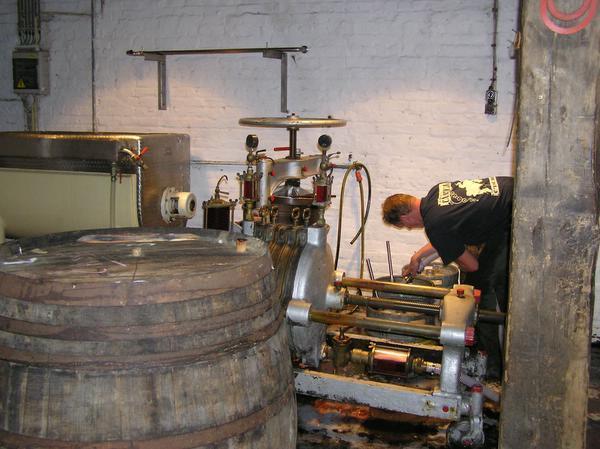 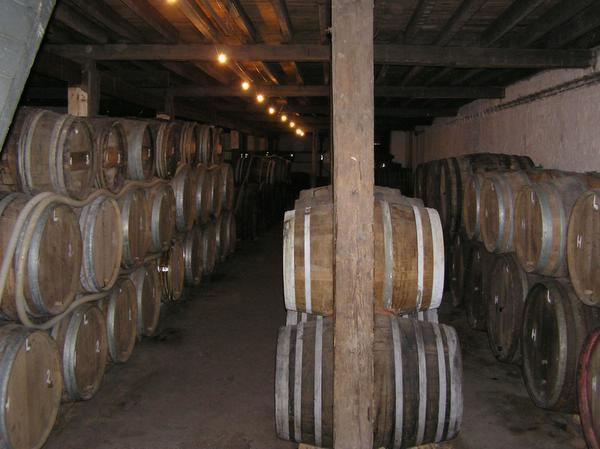 Once bottled the various beers are aged proir to release. It seems to be an art with the blending of the various beers. Each barrel of beer is taste tested by the brewers and blended based on these tastings to create the finished product.
We visited a number of brewerys and places of interest for homebrewers and will post pics over the next day or two.

Including
Guiness Store House in Dublin
Pilnser Urquel
Budvar
Belguim Beer Weekend at the Grand Place
Many pubs in Belgium, Czech Republic, London, Northern Ireland, Irish Republic and Singapore (which I have already posted about) 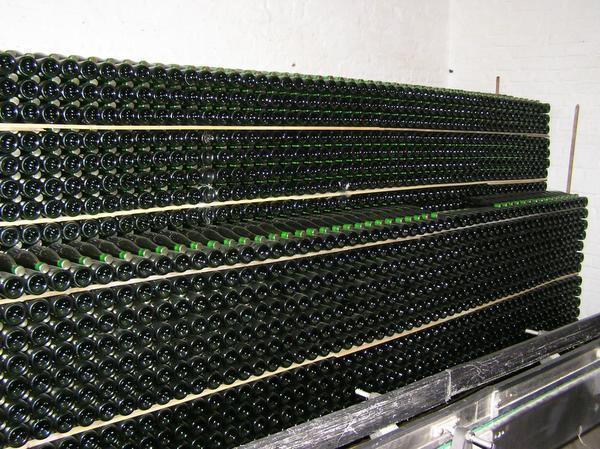 Sorry to hear about your place. Not what you want to come back to after a great holiday.

Awesome pics. Some a similar to ones I've seen published in Belgian brewing books. I'm inspired. Sounds like you had a great time. Looking forward to the rest of the pics when you get them up.

What a terrible shock to come back to that, hope Mrs nonic is taking it all ok...

loolks like you had memorable holiday - great pics - really look forward to your future postings...

Sorry that circumstances meant we didn't catch up in london...

Thanks guys, not the best home coming they even smashed my hydrometer However two of the police who have come around, are homebrewers who were very interested in the all grain setup. :beer:

No worries Ross, I was meant to catch up with Kook as well, but with the cricket and all run out of time in London (sorry Kook).

Brilliant posts, Nonic! Great photos and very good info - you must have taken a shite-load of notes! Sounds like you had a great trip.

Sorry to hear about your unit