Brewing on a Sailboat....

G'day all, great site you got here!

My name's BrewOnBoard and I'm living in Anacortes Washington U.S.A. (just North of Seattle). Been living on a sailboat for 10 years (but recently bought and moved into a small house) and we're planning on sailing down to Australia and going 'round it in a few years. Australia is very close to my heart because I lived and went to school for years 8-12 in Melbourne. I've also worked in The Isa but that's another story....

I started brewing about 15 years ago at a brew-on-premises place where they had all the kit and ingredients there. The guy that ran the place was magic and he made us feel like we were doing all the work, but really he kept us from screwing up the batches. Those batches were all extract and steeping grains. Good times.

Took some time off brewing and a few years ago took it up again. I had to pair down the equipment and technique quite a bit to be able to do it in a small sailboat galley, but I was able to figure out what kit was necessary and what wasn't. Been doing extract and steeping grains on the boat for a few years now.

Now I'm trying to perfect the art of brewing with limited ingredients. I've brewed a couple kit and kilos before but and they weren't great, (mainly due to piss-poor technique). My goal is to make the best beer I can with 100% shelf-stable ingredients. To me that means only using Coopers kits, DME/spraymalt, sugars, dry yeast and water. If I get access to fresh grains and pellet hops on the voyage, great, I know how to use those, but for the rest of the trip, I want a bilge full of ingredients that I can turn into good beer!

Nobody else seems to know the Kit and Kilo techniques like the Aussies, so I look forward to learning a lot!

I'm guessing the reason you can't load up on hop pellets is they ideally need to be kept cold? My suggestion is some alternative bIttering / favouring ingredients that can be stored dry like bitter orange peel & corriander seeds, I know that is traditionally a witbier addition but I added it to a golden ale last Christmas and it was top notch.
Mainly I wanted to reply to your post so I could point out how insanely jealous I am of you. It's a lot.

Hey thanks for the tips. Wheat beers are a brew that I don't think I've ever brewed before. I hear they go off like a rocket and ferment quickly. Might be just the go for crossing an intentional border (where you can't bring much booz across) and then a quick ferment and we're back in the grog!

As for the jealousy part, all I can say is that living on a boat is fun and does not have to be expensive. I learned that by accident when unemployed once. Let someone else pay the rent on my moorage slip and I put my phone, car-insurance, etc all on hold and took off sailing to save money and wait out the economic downturn. I found out that my only expenses once out sailing were food, diesel and beer (not necessarily in that order). The boat was cheap (and was a heap) but she wasn't trying too hard to sink and living at anchor was fun and cheap as chips. This time the plans are bigger, but it something anybody can do given a little time.

G'day Bob,
I'm building a 12.5m sailing cat and plan on spending a few years sailing until the kids have to go to high school. I'm an all grain brewer and had planned on brewing on board. I've almost given up on the idea, some of the problems are:
1. Fermenter temp control. We will be cruising Pacific Islands/Asia to start and 30C + isn't a good temp for fermenting. Had thought of making a 3 keg fridge with an attached fermenter box cooled with a pipe/computer fan from the keg fridge. Ended up taking up too much space and the added weight on a high performance cat like mine is a killer.
2. Even on a cat with no heel, keeping the wort/beer in the fermenter could be a challenge, plus oxidation issues from it splashing around. Could make a gimballed fermenter, that would be pretty cool.
3.Water. I've built a 210LPH watermaker so water volume OK, but still would have 250-300ppm tds which may cause some unusual tastes.
4. Could have some tax/import problems with 3 kegs of beer and bags of grain.

Sounds a bit negative, and there are ways of doing it. Could brew Saisons only, perfect ferment temps, The new Belle Saison dry yeast would make it easy, would be interesting to try with a kit brew. Tricky bit would be cold crashing to drop out the crud, would be a pretty rustic farmhouse ale.

Depends a bit on the beer you want to drink, I'm a bit anal and wouldn't be happy with a kit brew fermented hot. That may change once onboard of course and the cruising kitty starts to shrink. Maybe I need to build a bigger cat
If you can get some temp control of your brewing process then you can make some decent brews with the coopers kits. Having some hops in the freezer will add some more flavour, and they wouldn't take a lot of room vacuumed packed. Storing some Xtal grains for steeping wouldn't be too hard either, just keep the weevils out.
Maybe see you out on the water and share a brew.
cheers
sean

Good luck building that cat! I built a 14ft boat and thought that was a lot like hard work, can't imagine building a real boat.

I do plan to carry the fresh stuff along with me and use it wherever I can and re-supply as often as possible. Hops are often vacuum packed in mylar bags and those plus DME should really last. Still, I'd like the skills to do it with just the kits.

As far as the challenges you mention I'll offer up this:

Oxidation shouldn't be a problem at all. A sealed fermenter is just that, sealed, so it'll only be the co2 in the headspace that is sloshing around with the wort. I'd say that a really long blow-off tube run up high (though you don't even heel) would probably do the trick. Besides, the motion of the ocean would act like a giant stir plate for your fermenter right? Should be a good thing. Besides all that sloshing around of brew should make our IPAs all that much more authentic right? Aquavit anyone?

Generally though I expect to brew at anchor. Temp control in the hot areas has 4 solutions I can see besides what you suggested:
1: Ferment beers that like it hot (unfortunately not my favorite brews, especially when I am somewhere hot)
2: Use a salt water washdown system, or aquarium pump, and a wort chiller. Ferment the wort with the wort chiller IN the fermenter and circulate cool seawater through it. Exotic, but might work.
3: I've heard a wet T-shirt on the fermenter works great to cool by evaporation.
4: Have the fermenter float beside the boat (or sit in your dinghy full of water) for the critical first few days. Temp after day 3 or so doesn't matter nearly as much.

The watermaker will present it's own issues but those can be accounted for I'm sure.

Easiest way to avoid tax on carrying all the beer is to drink it! :chug: No tax on the ingredients.

This sounds way cool. No wonder you buy a boat, they are so cheap there!
Seriously, some day...

Answering a temperature and sloshing question, I put a carboy full of saison on top of my washing machine. Every time it was run was good for it. You might want to time brews so you can cold crash and keg at anchor, let the brew enjoy the shaking at sea. Could also invest in a filter...

Using pre-bittered tins, keeping hops somewhere cool but not necessarily frozen might be a good way of just flavour additions/dry hop. Isn't that how ye ol hops used to be stored?!

Good sailing to you.

Good point! From my previous experience, Australian customs has the same sense of humor as the American department of homeland security. Saying "Flower" or "plant matter" to an Aussie custom's official will get your ass tackled just as quick as saying "Bomb!" in a US airport.

That reminds me, I'm pretty sure my cat (who I plan to bring along) has rabies. Perhaps I should hide her in the bilge... 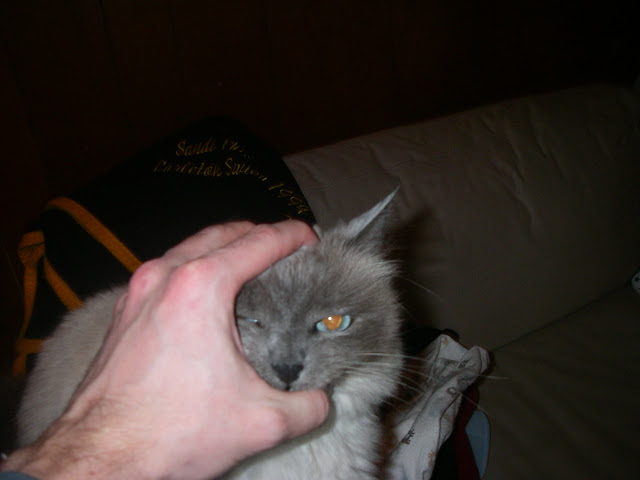