A couple of craft brewery-related stories in the Melbourne press over the last few days. A reminder that running a brew-pub is not all froth and bubbles - if it’s not the bloody council, it’s the bloody residents!

Regarding the Moon Dog story, anyone who grew up in Melbourne in the ‘70s and 80s (even the ‘90s?) will remember the TV commercials of legendary Italian furniture store owner Franco Cozza - cult status urban culture stuff. Like many others I'm sure I can repeat the dialogue of the ads with a perfect Italian accent but don’t understand a word I'm saying. 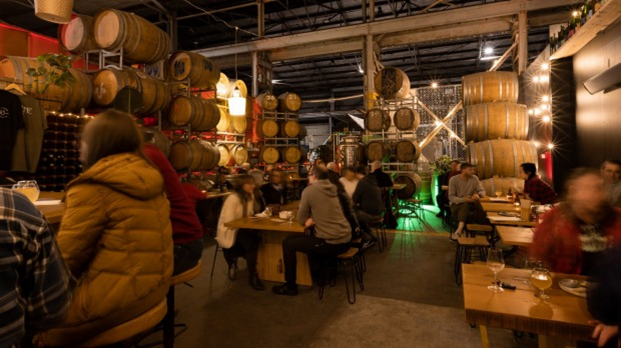 Two months after the high of opening its long-awaited brewery bar, Melbourne craft brewer La Sirene's operations have been brought to a grinding halt due to the presence of asbestos in the Alphington precinct at which it's located.
According to a statement by Darebin City Council, the council found traces of asbestos in two buildings at the Melbourne Innovation Centre, where La Sirene occupies a large former artillery factory.
On the afternoon of December 2, La Sirene's founders, Costa and Eva Nikias, and their staff were suddenly locked out of their production brewery "out of an abundance of caution" by the council. 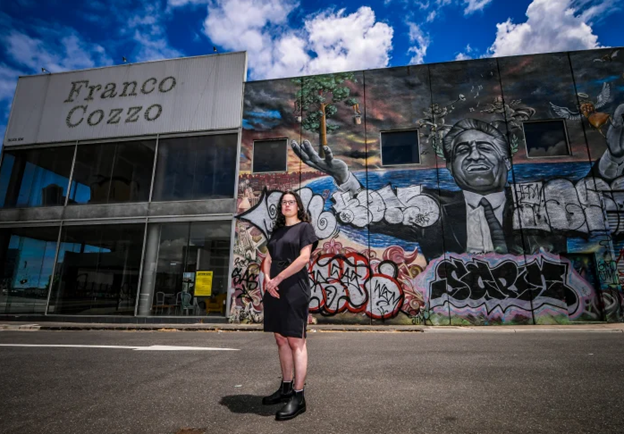 Residents are launching a campaign to stop Franco Cozzo’s Footscray showroom from being turned into a brewery, out of fear it would exacerbate problems with parking, traffic and noise pollution.
Last week, Maribyrnong City Council released a planning application by Melbourne brewing company Moon Dog outlining plans to transform the Cozzo building into a three-storey live music venue with a rooftop bar, playground and capacity for 900 people.
Moon Dog plans to retain Cozzo’s famous style by installing a grandiose baroque fountain and ornate furniture, and by keeping the Hopkins Street warehouse’s famous signage and mural.
But while the plans have drawn much excitement, they have left some residents frustrated.
Sophie Vassallo decided to lead a community campaign objecting to the planning application.
“It does make me angry that some people are just supporting the proposal. It will bring no value to the locals,” the 29-year-old said.

What annoys me, is that a few cranky residents (who chose to live in the inner suburbs, where it is already busy - and Footscray is a very busy place) can complain and scupper a project, despite it being something that would benefit a large proportion of the community. I know plenty of people in the inner west of Melbourne who this sort of place would benefit.

Probs a bunch of Nigel no friends, who can't stand to see other people having a good time.

Could also be other businesses complaining as well. When I worked in bars in Newcastle, there were heaps of complaints about venues from so called "residents". Turns out it was other night clubs trying to screw the competition.

For the uninitiated (and check out the comments under the video on the YouTube page).

I worked in a factory in South Melbourne in the early 80s and one of the packing girls there got married and her parents had given her a Franco Cozzo imported bed as a wedding present. She brought pictures of it to work and showed everybody. It was a huge garish thing of carved wood with a Monza red padded leather headboard, with a friggin cassette deck stuck in it. Wedding night must have been thumping - doof, doof like an old Valiant with the speakers in the boot.

I remember the country highway motels having cassette players and radios in the bed heads. Used to think it was the coolest thing ever as a kid.

Ugliest furniture i have ever seen but the TV ad is inprinted in my brain, yes if you choose to live in the inner suburbs then you have to expect the noise and chaos.
L

Its hard work running the gauntlet of our planning and liquor licencing system. If you have never been forced to go to a court or tribunal it is daunting - I've worked as councillor and council officer, and solicitor in planning and property matters, as licensee and owner of a city night club yet going through the planning and liquor licencing procedures for my own craft brewery and distillery starts the tension all over again. Tax Office excise manufacturers licence was easy by comparison. Hopefully I'll get through the planning process without objection, but with something like the Footiscray site you just have to factor into the cost of doing business a VCAT hearing to allow the objectors to vent their hurt feelings.

Here's the Facebook page for the anti-development mob at Footscray.

Any person who comes out with something like this is showing a fundamental misunderstanding of how society functions.

In fact it could be argued that the extra taxes to be paid by both Moon Dog and it's patrons will help gov to provide better childcare, healthcare and housing.

All the High rise being built in the area.....where do we park...and get rid the drug trade in footscray they should going for..... 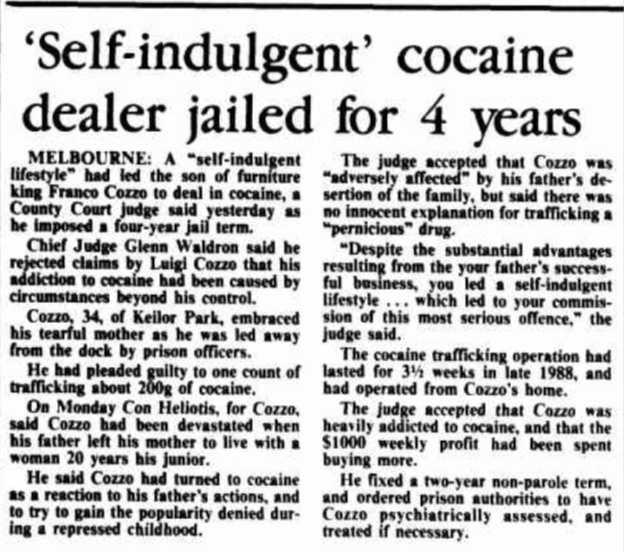 Yep, Footscray has long had a reputation for drugs. If you want it, you can find it on and around Barkly street. Head down for some Vietnamese food, then pick up your weekend supply of heroin on your way home. Good times all round!!

Wonder whether Moon Dog will resurrect this 30 year old amusement when they move into Franco Cozzo’s old premises - bus loads of voyeurs passing by to take a perv at the patrons. Could give rise to a signature house brew, perhaps a Heterophobic Bitter. 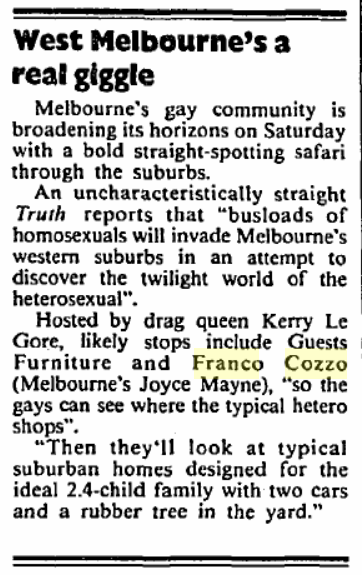