Well I have had the March pump kicking about for the last few weeks and I have not brewed for at least a month. So this weekend was time to put it all into action. I can't say I thought it out too much but the existing bench was stripped and with the assortment of parts from bunnings away I went.

Decided I would go for the boiler & HLT being at shin level since I have a pump but raised slightly over the pump to make sure it can prime. The 4 ring burner is mounted straight under the boiler so there is no stuffing about. Mash tun and mill are at bench height.

Chilling I just chucked the immersion in a bucket of cold water with the tap running and it worked well, next part will be a HERMS heater/CFC in one.

Bit of home wiring on the pump and a light switch and I was away with a fairly simple pils to christen the brewery. B)

Some points I picked up on:

*Had the wood that supports the boiler just a little close to the burner ... small fire no risk to the beer or equip (fixed h34r: )

*Those brass fittings get f#$ing hot when you pump hot stuff through them (yes I was surprised, felt a bit like homer simpson after the 10th time)

All in all it went pretty well and the brew came in on volume but high on gravity ...

One point for those of you who use March pumps ... what kind of flow are you getting when you pump wort through a CFC. I was getting 1.25L/min which I figure may be due to the 18m of 3/8 copper providing a fair resistance. Just wondering if I hadn't put the boiler on ground level if the flow would be much higher?

Buggered now, a few pics in the gallery if you are interested. 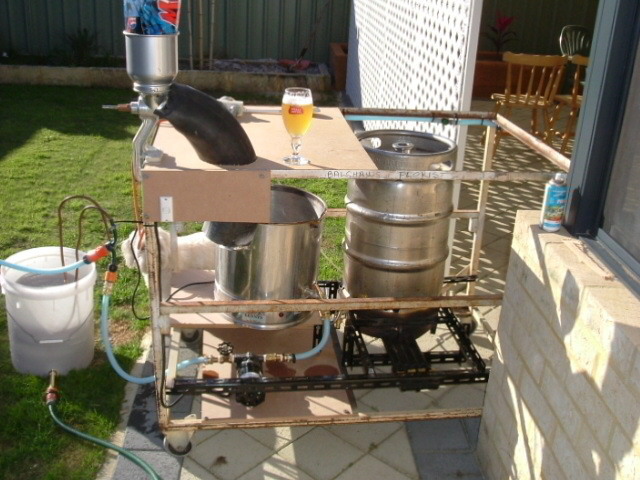 Look forward to tasting the fruits of your labour ;-)

As for the flow rate. thats about the same as 'Trash Mash Al's' system. He's pumping through a similar length of 3/8" pipe too (although it a more conventional home made CFC).... He found that as he shortened the lenght he had to slow the pump down anyway to achieve the same temp drop.... His final lenghts is ~ 14m i think...

One thing that can restrict flow is the choice of connections. If you use a connection that has a 1/2" bard the ID of that barb will be much less, and you will get a restriction at this point of the system. I've seen some barbs on connectors with a 1/2" OD that looked like they only had a 1/4" ID.

The ball valves and quick disconnects I use have a full 1/2" flow. This means the OD of the barbed end is 3/4" and you can't use the blue drinking water hose. I had to use Nylex TMP hose (http://www.nylex.com.au/polymer/tmp.htm) with a 3/4" ID to fit the barbed end of the disconnect. This is matched by the 1/2" copper used for the inside tube of the CFC I use.

MAH said:
One thing that can restrict flow is the choice of connections. If you use a connection that has a 1/2" bard the ID of that barb will be much less, and you will get a restriction at this point of the system. I've seen some barbs on connectors with a 1/2" OD that looked like they only had a 1/4" ID.
Click to expand...

Yep I noticed this, I tried to put an elbow in the suction line and I think that the combination of the reduced id and the bend itself really stuffed the flow ... with a straight connection it is acceptable. Would like to have a larger ID but this was the easiest stuff I could find (and cheap!) and it allowed me to use std hose fittings to keep it simple for now