Blueprint For An Immersion Chiller

I am going to make an immersion chiller this weekend and am looking for some information on the best size of copper pipe to use and the optimum design for use in a 20L pot.

I have the famous BigW $20 pot and am going to build something that will (ideally) bring the temp down below 25C within 10-15 minutes. I am probably going to build two copper coils to achieve this, the second one will be placed in a bucket of ice slurry as a pre chiller to bring down the tepid tap water temperature.

While I am at it I would like to know how you guys who have made one clean it and keep it clean between uses. As it is something that only gets used for maybe 15 minutes maybe once a fortnight/month when brewing how do you keep it sanatised? After bringing it out of the sweet sticky wort it must take a bit of cleaning?

Finally, would Bunnings be worth trying for the pipe? or would somewhere else be more competitive on price?
G

The best idea with an immersion chiller is to put it in the boil for the last 15 minutes or so. That will sanitise it for you.

After use I just hose mine off and pump out the excess water. If you hose it straight away it does the job in my experience, but you can always get the last of the hoppy bits off with a stiff brush. On brewday I give it another quick rinse and Bob's your uncle!

This was recently covered in this thread.

In short the answers to your questions-

Immersions Chillers- sanitised in the boil, easily cleaned with a quick rinse. If dirty clean with some form of acid.

Bunnings a little expensive and sometimes can require you to buy 18 metres worth. Other places can be cheaper, and can get cut to length

With your pre chiller, use once the wort has been brought close to as low as you can get using tap water first, otherwise the energy will be wasted.

Here's one I made a few years ago. It hasn't been used in a while and I've obviously swiped a couple of bits from it along the way but you get the idea.

The basic premise is that it actually hangs from the rim of the pot so the cooling is taking place in the top half of the wort. It also has the messy coils that I'm a fan of (neat coils look great but it is so much easier for convection currents to 'insulate' them).

It is also designed so that any leaks from the hose attachments can't dribble into the wort. The short lengths of hose just had standard garden hose connectors on them (and hose clamps securing them to the copper pipe). The cross-bar is just for structural support and is not actually connected into the pipework.

The whole thing happily sits upside-down on a shelf between uses.

It's a bit more messing around but that's half the fun isn't it?!

By the way, this was built for a 60L pot - so bear that in mind if you decide you want to do something similar.

This is the sort of information I am looking for, cheers guys.
In my trek through Google I found that 3/8 annealed was the way to go and that seems to of been confirmed, does anyone know why this size works best?

Wortgames, cheers for the pics and the "messy" look info. I was going to make a pretty looking one with neat coils but if it works better like this then thats what I will make.

Only problem now is getting the Copper. Priced it tonight at Bunnings and it was $80 odd bucks for 18M coil but they will sell it by the Metre for $7 :blink:

Anyone know a good scrapyard south of Brisvegas?
G

My intention was a rotating figure of eight. That turned out to be beyond my skills, so I took a more abstract and zen approach.

I'd offer to draw a blue-print but my nephew borrowed the spirograph. 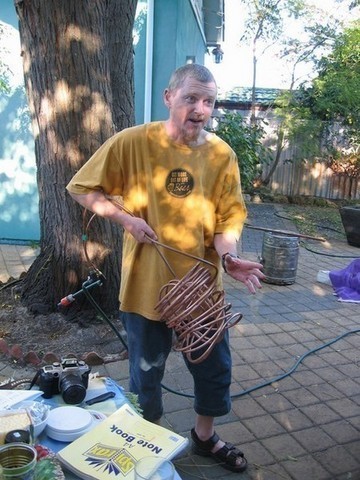 GL - I am humbled - we are obviously in the presence of greatness! :super:

Oddball - try a couple of refrigeration supply places, they seem to be cheaper. Even cheaper still if you can get matey with them, give them the homebrew story and get it at trade... You'll probably need to buy a whole coil though.

Wortgames said:
GL - I am humbled - we are obviously in the presence of greatness! :super:

Oddball - try a couple of refrigeration supply places, they seem to be cheaper. Even cheaper still if you can get matey with them, give them the homebrew story and get it at trade... You'll probably need to buy a whole coil though.

Cheers, I was just wondering on average how much length you guys put into your coils? 10, 15, 20 metres? more?
G

Just make it to fit your kettle, Oddball, and use whatever looks right. I'd say you would want between 5-10 metres. My chiller above uses probably 6m or so, but it's 1/2" (3/8" would be better, and you could fit a bit more length in).

The more tube you have the quicker it will chill, but the more room it takes up in the pot.