Now that is positive thinking. Lost the girl, can still have beer and footy.

Biker Models Ex's Wedding Dress to sell so he can buy beer and go to the football
Larry Star has sold his ex-wife's wedding dress for $3,850 in an online auction. But Star says he needed to show potential buyers what it looked like, so he tried the gown on.

Star's wife left him two years ago. She kept the ring, but left the dress.

Star was going to burn the dress. But instead, he decided the best way to get revenge was to put the dress up for auction on eBay and make some cash on it.

Star has received around 100 bids on the dress. Among those bids are a handful of marriage proposals. But Star says he will not accept any of those proposals.

The gown is a size 12 and sleeveless, the best way to accent Star's tattoos.

Star says he plans to use the money from the dress to buy some beer and see a Mariners game. 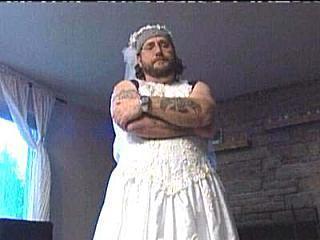