The mainstream beers of the Czech Republic seem to be in even more strife than their Belgium compatriots. I purposely tried a 6 pack of the "new" Pilsner Urquell before I left and was not terribly impressed. Same scenario as I outlined for the Belgian mainstream beers - lots of calcium chloride and other mineralisation replacing that old beguiling maltiness of PU as I'm sure we would all like to remember it. So how does it taste at "home"? - exactly the same. An even bigger surprise was the Budweiser Budvar - they too have gone down the same megalager path of mineralisation. Very disappointing. That left me with Krusovice in both Pilsner and Schwartz beer versions. I like both (they are available in Australia) with a leaning to the darker version.

Industry colleagues explained the "rationalisation" of brewing in Czech and the number of smaller breweries that were being shut down. In the town of Hradec-Kralove where I stayed, the local brewery - "Pivovar Hradec-Kralove" closed 2 years ago with all the equipment being removed. Their beers were known under the "Lev" brand and used to be exported to the US and Germany among other countries.

Prauge is awash with signage for both PU and Budweiser Budvar with the occasional sign for Krusovice and then some of the smaller breweries. It was impossible to find any other Czech brand around the sidewalk cafes although I did find Schofferhofer on the menu at one cafe in the old town square and enjoyed its freshness for an early lunch - exactly one week ago. Seems a long way away now as I type this!

Prague, by the way is a beautiful city and well worth the visit even if not for the beer. I took this pic as I reckon it somes things up pretty well - and very sadly.... 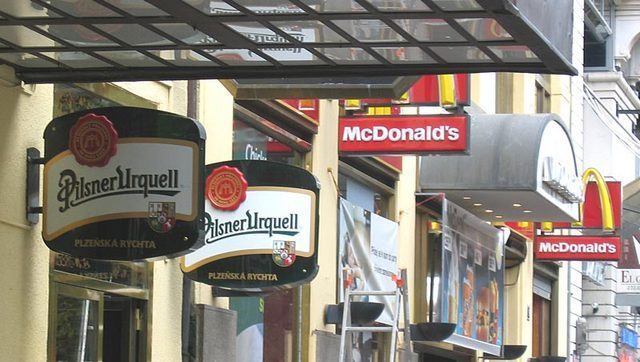 My daughter has lived in Praha since 1996 so I have done the odd trip there. I must admit I was disappointed in the beers last year compared to the 1998 trip but did not realise why, so thanks for that info Wessmith. Anyway, ended up usually drinking Guinness at one of the several Irish pubs (she married an irishman). The trouble is that the Guinness seems to be the same silly price of about $6.00 or $7.00 a pint everywhere in the world including Czech. The price of a beer to the locals in 1998 was AUD$0.70 per litre so the cost of living was negligible. The cost to tourists was double. Fortunately Liz was considered a local!
My favourite bottled beer was called (in Czech) "The Old Goat" and of course had a goat's head on the label and I truly discovered the elixer of life in a little pub on the riverbank in Chesky Cromlov. Sadly it was washed away in the floods

That picture just looks soooo wrong.
One of those PU signs would look great on the side of my brauhaus.

Apart from trying the beers (and being dissappointed) did you pick up any goodies while over there Wes ?

That story has really pi**ed me off Wes :angry: I spent some time in Prague in '95-'96 across their winter and the beer was an absolute revelation. I'd never tried their beers before and have been chasing that taste ever since. If the big companies have buggered up the genuine Pilsners then I hope they all go broke. And I thought the Urquell's I'd been buying from the shop here just weren't the same because of freshness/transport issues. There oughtta be a law... :angry: :angry: :angry:

Thanks for the heads up Wes,

More on the beer duopoly in Australia