Sept 27, 2004 - Soldiers in Iraq crave beer, women and high-speed Internet connections, in that order, says Sgt. Dale Rogers. His answer to the first desire was to create beerforsoldiers.com, a web site that allows visitors to donate money to a beer fund for troops in Iraq. Rogers will use the money to buy beer for soldiers on mid-tour leave and for a homecoming bash after the tour ends.

Beerforsoldiers.com allows beer buyers to click on links that charge their credit cards for anything from $2 for a "40-ounce ghetto beer" to $6 for a "tall beer from the bar," to $7 for a six-pack. Other donation options include $10 for a pitcher or $20 for a keg club.

"I go to a pub where there are 20 to 30 soldiers around the bar. I ring the bell and say: 'Free beer for everybody.' The bartenders think I'm crazy. I get to meet new people and new soldiers and I will buy two or three rounds," he said.

Extra beer funding is provided from the sale of T-shirts with the message: "Hold my beer while I kiss your girl" and "www.beerforsoldiers.com" on them, he said.

Soldiers in Iraq have to settle for near beer. "People still drink it and imagine it tastes like beer but to me it tastes like [something unmentionable] drained through a wet sock. I am dying for a real beer," Rogers said. 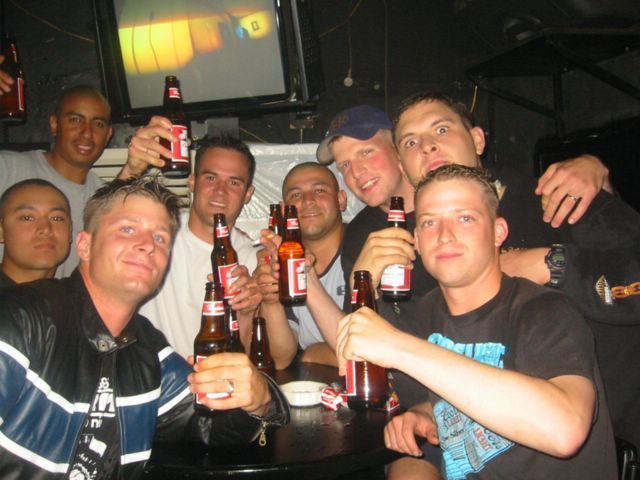 I'm not giving them any money if they're just going to buy Budweiser with it! Or is that what they mean by "near beer"?

CAMP RED CLOUD, South Korea The 2nd Brigade soldier who created www.beerforsoldiers.com, a Web site that lets people buy a beer online for a U.S. soldier, has been ordered to stop running his site.

Sgt. Dale Rogers, in Iraq with Company C, 1st Battalion (air assault), 503rd Infantry Regiment, posted a notice on the site last week informing readers that he is turning it over to his brother.

A spokesman for the 2nd Infantry Divisions 2nd Brigade Combat Team, which includes 1-503, said in an e-mail that lawyers from the unit rendered a legal opinion that the Web site violated the Joint Ethics Regulation.

The soldier seems to be using his association with the Army as a way to solicit funds for beer. Whatever his intentions, and Im sure they are genuine and pure, (the Web site is) illegal. I noted however, that the site is still up and running. I am confident it will be shut down soon, the spokesman said.

Last week Rogers posted a defiant message on the Web site in response to the order.

I am currently serving somewhere outside of Fallujah, Iraq. My Web site is going through a change; I am turning over this Web site to my brother due to legal pukes who say a soldier cannot solicit beer donations to increase the morale of his fellow soldiers. What a crock! But I am a soldier and I have to comply, Rogers wrote.

By Sunday night beerforsoldiers. com had adopted the slogan The Web site where you cannot buy us a beer.

Rogers set up the site in February before joining 1-503 in South Korea, where the unit was based before deploying to Iraq last month.

Beerforsoldiers.com used to let donors click on links that charged their credit cards for anything from $2 for a 40-oz. bottle of beer to $6 for a tall beer from the bar, to $7 for a six-pack. Other donation options included $10 for a pitcher or $20 for a keg club.

The site includes dozens of photographs of soldiers enjoying the beer.

In South Korea, Rogers spent money collected from the Web site buying drinks for soldiers at local bars. He had intended to save money generated by the site while he is in Iraq, where soldiers are not allowed to drink alcohol, for drinks during a midtour leave in Qatar and a homecoming party for soldiers at the end of his one-year tour, he said.

Now, clicking on the Dont buy us beer link at beerforsoldiers.com takes you to a page with the word violation displayed six times, an invitation to the and the message: We would still love for you to buy us a beer but the legal folks say you cant.

Donations rose sharply after Stars and Stripes ran a story about the site in September, he said.

An e-mail from Rogers stated he was ordered to cease and desist running the site at the behest of the Armys lawyers.

However, Ron Buchholz, a civilian attorney for the Department of the Army, Judge Advocate General, Standards of Conduct Branch in Washington, said he merely sent Rogers command an e-mail stating that the site raised legal and ethical issues.

Buchholz said he has no authority to issue orders to soldiers but acknowledged that an order from Rogers command may have been a response to his e-mail.

Federal regulations make it illegal for federal employees, including soldiers, to solicit or receive gifts. But numerous complicated exceptions to those rules mean legal opinions often are sought when people want to give soldiers presents, Buchholz said.

The shaven-headed infantryman does not appear happy about the Armys ban on beer donations.

Youd think that a soldier risking his life in a war zone, usually under enemy attacks almost daily, could at least have the right to maintain a morale builder for his fellow brothers, such as this Web site, Rogers said.