Beer can house in Houston to be restored

HOUSTON - A Houston home decorated with thousands of flattened beer cans wont face last call, thanks to an art endowment.

Beer-lover John Milkovisch attached the cans to his house over a 20-year period as an alternative to more traditional home repair. He also made beer-can fences and garlands to hang from his roof.

The home was becoming a nationally celebrated folk-art site when the Southern Pacific upholsterer died in 1988 at age 75. Since then, it has suffered years of decline.

Now, a 125-thousand-dollar grant from the Houston Endowment to the Orange Show Center for Visionary Art will help restore the home.

Orange Show officials say the house will open for tours after repairs and restoration are complete. 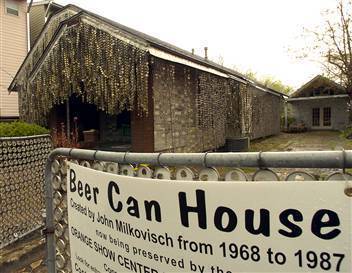