Barbie Goes To The Oktoberfest

A Munich designer has turned Barbie into a beer swilling, sausage eating German.

The dirndl is the traditional dress worn by women in Bavaria and the Alps.

Waldron says he created the "Mountain Dirndl Barbie" based on Julie Andrews' character Maria in The Sound of Music.

However, he wouldn't say whether a lederhosen-clad "Comatose Ken" would be joining Barbie.

The one-off tiny ensemble consists of a hand woven French tweed skirt, a red apron with Swiss embroidery and frilly blouse with a cotton gauze and lace decollete. It also comes with the metal stein - the lidded tankers Germans use for beer at the festivals.

She will wear the dress again at the Munich Oktoberfest, which begins on 18 September.

The miniature is a preview of the life-sized dirndl that will be part of the Rena Lange 2005 summer collection. 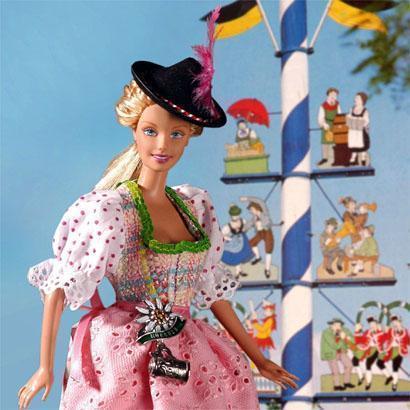