Awol Machine. No Hangover - No Carbohydrates!

Ok, this is just plain weird.

Checkout the website here or the news article about the attempt to ban it here.

AWOL - A Better Way To Enjoy Your Favorite Spirit!

AWOL, which is an acronym for Alcohol With Out Liquid, is the brainchild of 30-year old Dominic Simler, who discovered that by mixing spirits with pressurized oxygen, a cloudy alcohol vapor is created which then can be inhaled.

Billed at launch as the Ultimate Party Toy, AWOL machines serve bar customers via tubes and could be seen as a modern version of the Nargile or Hookah water-pipe which originated in India and became an important part of society in Turkey and Middle Eastern countries in the 17th century, eventually becoming the height of fashion at chic Western society parties during the late 19th and early 20th centuries. Like the Hookah, the AWOL machine has a central body and a number of tubes running from it.

When you want a bit of whisky -- you breathe in through the mouth, and it travels straight to the brain.

Finally, a solution to the two greatest problems today's drinkers have - hangovers and carbs.

The AWOL machine includes the hand-held diffuser into which the booze of choice is poured; this, in turn, is connected to an oxygen generator the size of a school backpack. AWOL makes it's own oxygen, so there are no tanks or supplies to ever buy. The drink is then breathed like a nasal decongestant, or breathed through the mouth -- instead of swallowed down the throat.

The AWOL Vaporiser is a machine which allows vaporised alcohol to be inhaled through the mouth or nose.

The Alcohol With Out Liquid Machine works by mixing spirits with oxygen, a cloudy alcohol vapor is created which is breathed in.

The AWOL, or Alcohol With Out Liquid Machine can be used to consume any spirit.

Alcohol use for the low carb diet...There is Banting's evidence. He took six glasses of claret a day and a glass of rum or something like that most nights when he went to bed, and still he lost weight.

Another researcher working with low carb diets, Dr. Gaston Pawan, of the Middlesex Hospital, London, mentioned the intriguing possibility that alcoholic drinks, by dilating the blood vessels in the skin and making it work harder, may step up metabolism to an extent, which more than compensated for the calories taken in as alcohol. This increased metabolism, coupled with increased loss of water from the skin and in the urine, he concluded, could then result in weight loss. There is experimental evidence for this. ALCOHOL AND WEIGHT LOSS

A great addition to your favorite room.

Awol is a very mild way to enjoy the aromas and flavors of fruit-infused spirits.
J

I've read of these before. To me they sound really dangerous; they are promoting alcohol as a drug, rather than a drink to be enjoyed, surely this kind of goes against what we should be teaching people.
Secondly, pumping alcohol to the brain without it being processed by the liver first is not what i would call the smartest of ideas.

All alcohol that hits the brain has not been through the liver first, it's the alcohol beyond the average of 1 drink/hour that sits in your bloodstream waiting for the liver to process it that makes you drunk.

Nonetheless, I agree with you that it sounds like a potentially dangerous idea.

Looks like the machine is getting into circulation in the US. 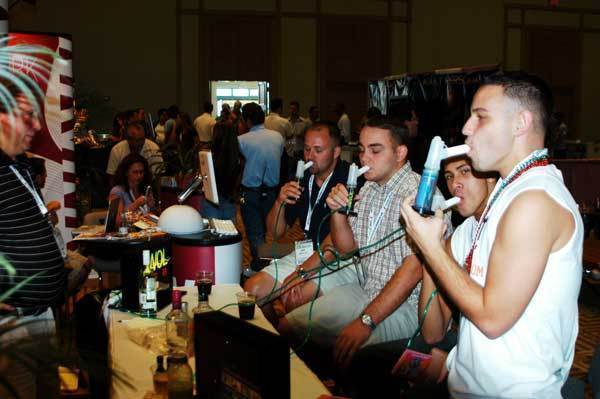 
Freakier though is they look like what my Dad looked like hooked up to his nebulizer(heavy respiritory machine) after his lung cancer op!!