This thread is a bit of an expression of interest, and a fishing expedition.

He's currently using them to make mega stills for people, but i asked if he would be keen to make some brew tree's instead.

Now we've all seen how expensive the american brew tree's are, and if i can guarantee enough interest, and the right amount for his effort, he may start producing an aussie version of the brew tree instead.

Show them a few piccies of whats around , then let them give an estimate of how much they may cost. I know I would probably be interested.

Are we talking a complete AG setup or just a brew sculpture ?

I'd be interested in finding out more about a brew sculpture especially something like this one that is also collapsable for storage and adjustable for the heights of the tiers so it can be changed from three tier to two tier and also allow for changing equipement sizes.

How is that for a wish list :lol:
Food for thought. 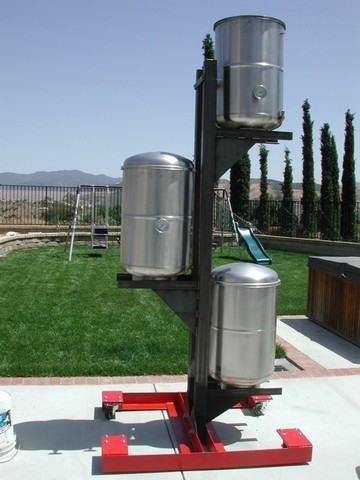 Do you have a pic of any stills he has made, and what he charges?

Sorry, i've been having trouble getting hold of him.

I explained the concept to him last night, he's going to go away and add up the cost of materials etc and work out how much he thinks it will cost. Should be back in a couple of days.
J

OK, the 50L rubbing alcohol stills apparently produce 95% pure alcohol, and are around $600 each.
B

There is a stainless steel company somewhere in qld i think that does them for about $500, but id still like to look into it.

This would not be something to post pics of on this site , or any site for that matter.
Perhaps PM jgriffin about this

If you do get pics , email them to me as well , I am also interested