Anyone Made A Fermenter From A Ss Keg?

Ive have access to a few 50L kegs, and was thinking of making a few into fermenters.

Has ayone done this? and if so, can you post some pics.

Thinking of cutting a hole in the top, and cutting the top off another a little larger so there is an over lap, and making a rubber seal for the lid. Use a SS tap that all you AG brewers are using. Drill a hole in the lid, fit a bung in it, and then the air lock in the bung.

I've seen pics of it done but don't have them on this computer. Hopefully they are on my work one and I can dig them up tomorrow.

cheers, id love to have a look. ill try and see if i can find anyone the net.
P

You can remove the spike, soak keg with napisan, rinse well, use your favourite no rinse sanitiser and they are ready to use as a fermenter. Fit a bung and airlock. You will need a siphon tube with a solid first section to get the beer out of the keg.

If you wish, you can fit with a tap and use this instead.

They certainly are a good option of a fermenter, you just need to address the cleaning and syphoning.
K

i figure because its SS, it would be alot easier to clean then a plastic fermenter
P

Yes, a good soak with napisan will clean it up.

What about this Kman? 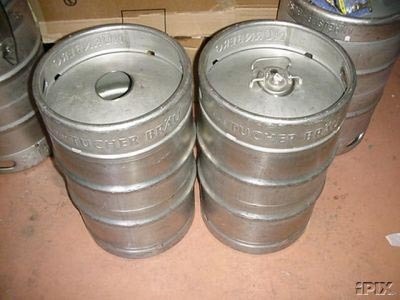 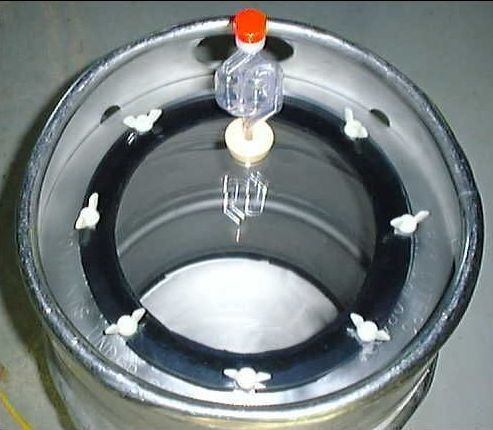 As long as you could fit it in your fermentation fridge. Otherwise temp control may be tricky. No expert though

That second one you posted Justin was the one I was thinking of and looking for.
Dammed if I could find the pic though.

stainless! now were talking, yeah just overlap it like I did on mine or im thinking for my next one to do the plastic lid as illustrated in the picture above but I rang a few places and they wanted like $30 plus for 10mm thick perspex.

if you have any connections for taps or pipe threads give me a yell.

If anyone in Sydney would happen to have access to a few 50L kegs and would like to off load them/sell etc plz PM me!!

Justin, also like the 50L kegs with the corny lids, are they yours? Wonder if i can find a place near me that would be able to do something like that.
P

Justin, with the cornie lids, did you do anything more than cut out the holes? Or do you need to do a bit of metal bending to get the cornie lids to fit?

RCB in the states sell cornie lids, about $US10 I think. PLus air release valves.
F

yeah i tried resiplex thats what im quoting. (it could have even been dearer from memory).

if you find someone that will do good TIG welds for a reasonable price ill take some of my stuff in too, because last time i got charged $25 to weld a pipe thread on.
K

hmmm, i thought resi plex would be heaps cheaper.

Ill ask around a few mates, and try and find someone that can do it, hopefully for a few beers, ill see how i go
K

How about this design-

Sorry to take a while to get back about the corny lids in the sankeys, no they aren't mine (I wish ), just one of the many pictures I've found around on the net. They look good though and just the right size for getting in there to clean.

From what I've found on putting corny lids in these kegs you just need to make and file the hole the right size and the lid will fit right in nice and tight. What you will have to modify is the length of the legs on the lid (don't know any other way to describe them, its the wire bit that holds the lid down, you know when you latch the lid). Apparently they are too long to clamp down on the keg so you need to file/cut them a bit shorter to make them work.

I'm going to do this on a keg soon, plan to also mount the fermenter on legs like the photo below but with slightly longer legs. I reckon when I do a double batch I'll drain the wort into two 25L fermenters then transport them to the 50L keg and fill the keg that way. By mounting it on legs I should be able to syphon straight out into corny's then without having to lift the 50L sucker.

As for temp control, I don't need it for ales in Tassie 90% of the time. Wont be able to lager in it though. 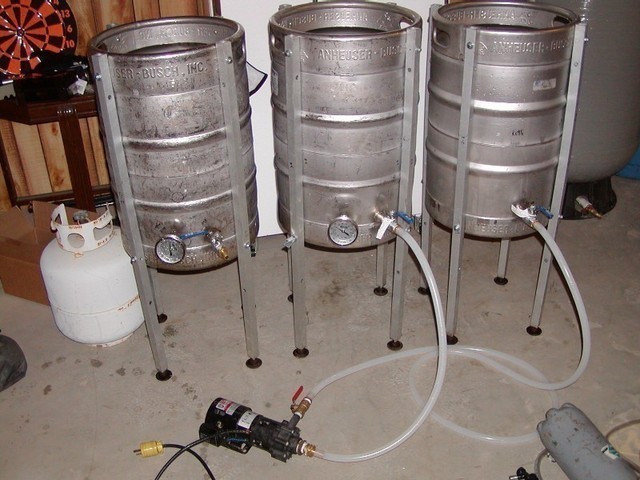 im with you justin, i only really want to do this for ales, maybe lagers when im in bulla. But other than that oly ale's.

P
Drinking from the fermenter