On sale Saturday. 10.5L I need a new stockpot, I ruined the old ALDI one by leaving it on the gas - dry - after using it for curry - for 2 hours <_< and the thick base has started to come away from the body and it won't sit on my Kambrook brewery hotplate any more.

If you are going to get one 10L stockpot in your life, get this one. It's the Mercedes of stockpots.

I can't see what the dimensions of the bar fridge are, if they have one out of the box on Saturday I'll see if it will fit a FV and post from my phone. Watch this space. :excl:

This freezer looks like the go too. you could fit two ferementers in here one above the other. Or make a decent kegerator out of it.

all i can say is thank f#ck Aldi just announced today they're coming to Adelaide... now South ozzies can get in on some cheap brew equipment!

as an aside, saw some cheap chest freezers at Masters the other day (passing through mt gambier - masters not in adelaide yet)

Good old Adelaide 30mins behind in time, but 30 years behind everyone else

Nobody's mentioned the ss Aldi electric jug in the same catalogue (1.7 litre & going for under $15 from memory?) which may, or may not, fit one of those flash ss HEX coils doing the rounds.
Wish Aldi would hurry up & put another vacumn sealer on special.
T

Can't tell if that freezer has removable shelves. Some of them can't be removed, which makes it unusable.
L

thenymang said:
Can't tell if that freezer has removable shelves. Some of them can't be removed, which makes it unusable.
Click to expand...

Even when the refrigerant is running through line which forms the shelf?
Modify, yes. Remove, no.
B

printed forms section said:
all i can say is thank f#ck Aldi just announced today they're coming to Adelaide... now South ozzies can get in on some cheap brew equipment! as an aside, saw some cheap chest freezers at Masters the other day (passing through mt gambier - masters not in adelaide yet)
Click to expand...

:icon_offtopic: Never mind the brew equipment, you will save so much money on food and general household stuff your jaw will drop. Most of their groceries and nearly all their dairy and fresh meat is Aussie, just rebadged with their own trademarked names. The quality is the same or better than the Coles and Woolies "own brand" variants but the same price as their no-frills (which seem to be disappearing) cheaper generics. Meat can be a bit hit or miss, but veg and dairy staples are brilliant. And no, the profits don't go back to Germany, well not for the forseeable future, every cent of profit earned here goes to re invest in new stores and distribution centres, such as SA. No affiliation.

There's an Aldi being built less than a 5 minute drive away from me
it was a bit of a pain in the arse driving 15 minutes across town (on a good day) to get to the other one (first world problems...)
B

The company policy is that an Aldi store will be built wherever there is a catchment area of 10,000 people. They need to build a distribution Centre in SA which could be a bit of a wait, then it will be on.
Also you SA mob will be in for a surprise, they build all their stores to German specs, just as if the store is in Hamburg or Berlin. So no fast build concrete slabs, nope your local store will be double skinned Besser block then brick, a big steel roof, and an "airlock" system so you have to go through sliding doors into a sort of hallway or vestibule, then more sliding doors into the supermarket itself. Familiar to anyone in the UK or Europe, it's to keep the snow storms out of the store :lol:

Don't forget all those German foods they bring in, starting with chocolate and ending with Knaeckebrot, Rotkohl, Bockwurst, Leberwurst, Bretzeln and so many more.

I'd be lost without them here.

i lived in nsw for a year a decade ago... i remember their stores being pretty rudimental and fruit veg was pretty ordinary. but in 2003 a laptop in a pallet stack at the checkout for 500 bucks was pretty special...
B

Typical lineup in Taree waiting for Aldi to open. Didn't mind queuing behind the chick in the lilac hoodie and the painted on tights - could have opened at 11 for all I was concerned 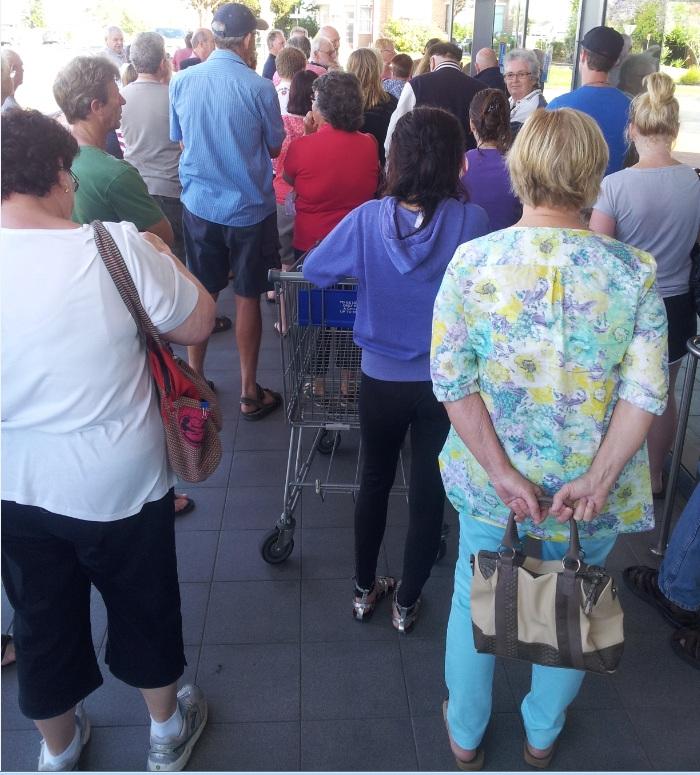 Am I the only person that hates Aldi?
Product is shit.
Their gear they have on weekly specials is always sold out before you get a chance to get there OR it never came to your local store.

Good stock pots available from catering suppliers can be had for about double the price and far better quality than the shit available from aldi.
I bought something like this http://www.ebay.com.au/itm/Stock-Pot-12lt-Stainless-Steel-Commercial-Grade-/290634524101?pt=AU_Cookware_Bakeware&hash=item43ab2ae5c5 for $50 delivered. Its brilliant.

I've got a crofton or what ever the aldi brand is teflon coated frypan mum picked up for me cause she liked hers so much. Its crap. Its buckled the outside has gone a whiteish colour and I could have picked up a non-stick robinox for similar money and I know which I'd prefer.
B

As a regular customer, I generally find Aldi stuff to be pretty good quality - it strikes me as Target quality but at KMart prices - and never had to take anything back, sorry you've bombed out on some purchases. They have a 12 month return policy on most items if you keep the docket.
I agree that you have to be there early as it can be a feeding frenzy sometimes on a Wednesday and a Saturday (specials day) and the Aldi-ites queue early - for example a pair of sheepskin car seat covers for $39 that I bought recently, they would have been gone in an hour.

My original Crofton cast aluminium saucepan and frypan set I bought four years ago is still going full strength and is of equal quality to a $90 frypan that I bought from a kitchen store.

One thing I have noticed is that when they have a popular item on a really good special - for example LCD TV etc, they now tend to get in a pallet load. I expect it has taken them time to get a feel of the local market depending where the store is.

I don't know if you have ever seen or handled an Aldi stockpot, it really is good quality with riveted handles and a thick base - it looks the equal of that Ebay one - I'll be queuing for mine on Saturday

Komodo said:
Am I the only person that hates Aldi?
Product is shit.
Click to expand...

I don't hate them but I won't buy their meat, fruit or vegetables. They're okay for their packaged stuff (for the price) but we don't buy much packaged stuff anyway.

I love the absolute freakshow that their catalogues are though. Almost always good for a laugh.

bum said:
I don't hate them but I won't buy their meat, fruit or vegetables. They're okay for their packaged stuff (for the price) but we don't buy much packaged stuff anyway.

I love the absolute freakshow that their catalogues are though. Almost always good for a laugh.
Click to expand...

We shop there for certain items and find the savings great.
I bought a leg of lamb there that would have been one of the best I have ever bought, the next one was the worst. I really like their snaggers though.

it is awesome in every way.

.. except their batteries... bought a massive maglite about 6 months ago, filled it with 6 D sized aldi batteries, tried to turn it on last night, no joy. opened it up, they had all leaked and corroded, to the point that I couldn't remove them from the torch without taking it outside and bashing the fark out of it, so hard against the concrete that i thought i would destroy the torch, and i mean really slamming it into the slab... it's a testament to maglite's quality that it survived!!

everything else i've bought there has been awesome, including MSA eye filet, which was something ridiculously low like $19.99/kg. i made fillet mignon (with aldi bacon) out of it and a bernaise sauce (with adli eggs and butter)... freakin superb. the savings are worth it alone, but a lot of the time the product is actually better than you will find elsewhere... except the goddamn batteries {shakes fist at the sky}...

*should mention the maglite was actual maglite brand and not from aldi.

*also aldi in europe is wicked. bought an 8 pack of 500ml bitburger in rome for something like $8 australian.

The highland grass fed steak is some of the best steak I have eaten and has won awards in australia.